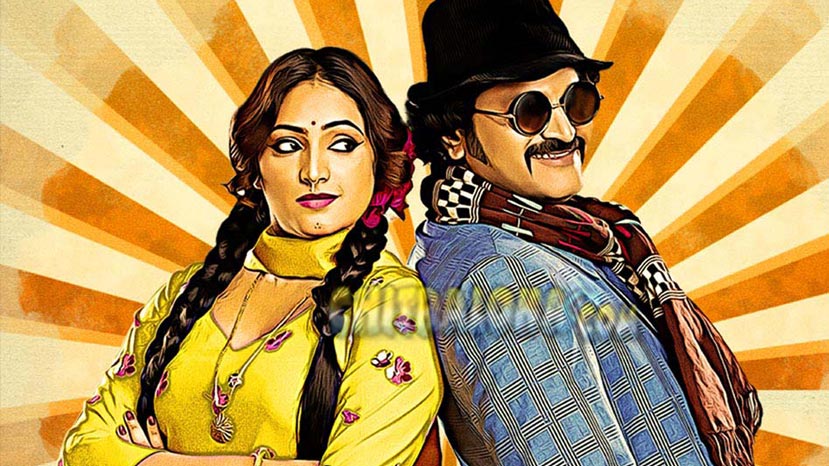 The Kirik Party director Rishab Shetty makes his debut as a full-fledged hero in Jayatheertha's suspense drama. Blended with perfect comedy, it is set in the 80s and hence the title bell bottom. But, it has more to it than a mere style statement. The tale is stitched well around an adventurous detective by name Diwakar portrayed by Rishab Shetty.

Unlike the most detective tales, this one sets the tempo on a lighter note. It is the humour which makes all the difference than the case which Diwakar literally breaks his head in solving it.

Diwakar, a police constable who is on probationary period solves a murder case within a month after he joins the duty. His father played by the talented Achyuth Kumar is overjoyed but soon Diwakar encounters peculiar thefts from police stations! Will he able to solve the mysterious case, is the crux of this tale.

The making of this suspense drama is one its strength which effectively brings the 80s on the screen. Right from the costumes, to the locations and everything back from the 80s has been brilliantly made use by the team to make it look authentic on the screen.

If Rishab does a probing act, it is Hariprriya who steals the show as Kusuma. The maturity in her performance stands out and her retro look and costume makes the audience fall in love with her character which plays a vital role in the end.

Funny sequences with good casting makes it a worth watch which will certainly please the audience who seek for a difference. Yogaraj Bhat makes an impression in a short role. Ajaneesh has scored it well along with the popular number ‘Yethake..’ Do watch Diwakar, who eats carrots to sharpen his brain. He will not only make you laugh but will also leave you surprised with his detective skills