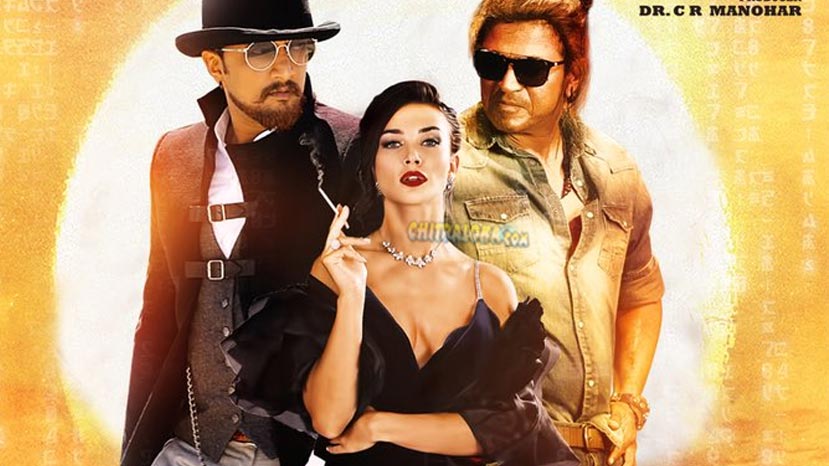 The Villain which released today has one of the biggest coming together of stars in the Kannada film industry in recent years. The film has lived up to its hype as director Prem brings together a fascinating retelling of the epic Ramayana. It is a completely different interpretation of the characters of Rama and Ravana that Prem defines in this film.

The film has a complex storyline but has been narrated in a easy understanding format. The film starts with a boy becoming an orphan after his mother leaves her husband and the father dies. The mother has given the son life lessons in goodness of Rama. The father has explained that in the modern world Ravana's thinking is necessary. Which of the two does the son grow up into?

Shivanna is introduced first. He is searching for someone and becomes a terror to everyone because of it. There are some amazing chase and stunt sequences to showcase his character. Amy Jackson is also introduced here.

Sudeep is introduced next. He is an international criminal. He is charmed by Amy Jackson and ends up kidnapping her. From here the set notions of the story keeps on changing. You do not even realise which of the two heroes is the boy from the first scene. It is revealed much later.In the meantime there is a cat and mouse game between Shivanna and Sudeep. It gets more interesting after the interval when the two actors come face to face. Prem has handled these scenes extremely well and it is a treat for the fans of both the actors. Though the film is nearly three hours long you do not feel that as there is a steady infusion of fresh ideas and actors. Mithun Chakraborty, Sharat Lohitashav, Mandya Ramesh, Kuri Prataph and others join the screenplay at strategic points giving new dimensions to the story.

The songs are placed at the right place and gives the film a good boost. The songs feel and look better than when you have only heard them.

Apart from the magical performance and presence of both Shivanna and Kiccha Sudeep, the songs and the background score elevates the experience to another level. A movie for all especially for the fans of Kannada movies and the two stars, The Villain turns hero for all the Kannada movie lovers and especially the fans of all Shivanna and Kiccha Sudeep. The stunts are of international standards.

Overall The Villain is a bang for the buck entertainer that will hearten the fans and give their money's worth to the audience. A perfect Dasara treat by Prem for Kannada audience.