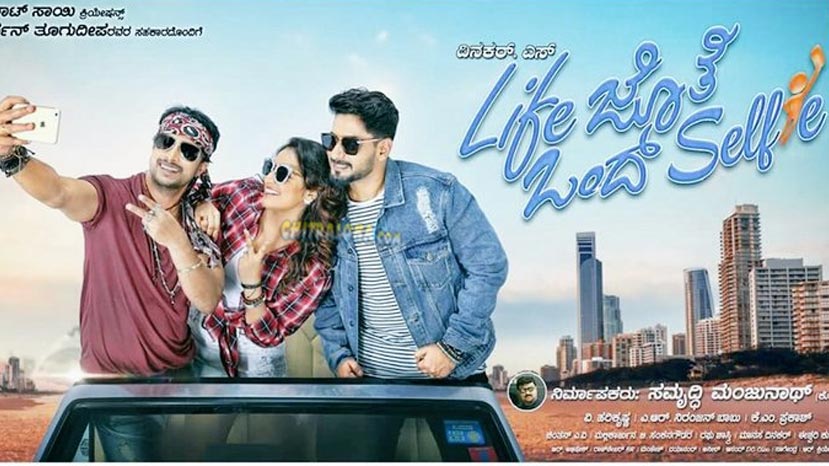 After the blockbuster hit Sarathi, director Dinakar Toogudeepa is back with Life Jothe Ondu Selfie. This is a multistarrer with Nenapirali Prem, Prajwal Devaraj, Haripriya, Sudharani and others. The film is unique in many ways. It is a very youthful film that talks about so many things that are important to the social and personal lives of youngsters these days. The film starts with the introduction of three characters.

Prem's family members want to get him married. But he wants to quit his job and become a film director. He takes a break, quits his high-paying job and heads to Goa. There he meets Haripriya who seems to be hellbent on having a good time whatever the situation. The duo then come across Prajwal who too is in Goa from Karnataka but does not reveal why. The stories of Haripriya and Prajwal is revealed in flashbacks. They are not in Goa for a jolly time but trying to come to terms with problems with their life. Will Goa give them solace?

The second half of the film shows how the three solve their personal problems. It all happens during the course of a few days in Goa. But is that really possible? For that you have to watch the film in theatres. It will give you a nice entertaining list of possibilities. Enchanting locations of Goa are showcased in the film that will take your breath away. Will Haripriya get around to the idea that her life will change beyond recognition after marriage? Will Prajwal manage to get a real life for his mother? What will happen to Prem's idea of becoming a director?

Dinakar Toogudeepa is back with a bang. He has managed to narrate a beautiful picture that also has important message for the youngsters of today. Life can be as easy as taking a selfie. But it is important to learn from the experiences of others and understand that life is more than just a party in Goa. It is a kind of film that will pull at your heart strings and also give you beautiful memories to take back home.

The acting by the main characters is superb. Prajwal as the rich kid who has a face off with his father to protect his mother, Haripriya as a tomboy who has to understand life after marriage and Prem who has to take a life changing decision are all characters that audience will relate to. All the three have done brilliant jobs. It is Sudharani as the mother of Prajwal that steals the show. She can act with subtle ease. Dhananjaya is in an extended cameo but makes a big impression. There are some beautiful songs too and as said earlier superb locations. Overall it is a perfect wholesome entertainer film with a message.