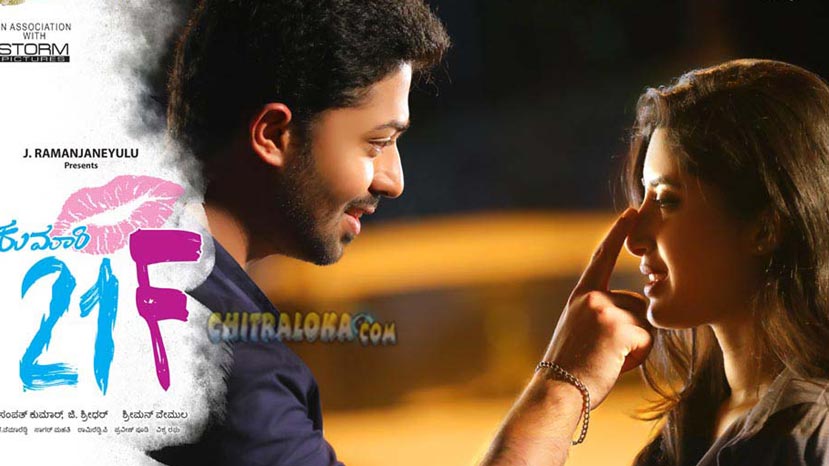 Kumari 21F which marks the debut of Pranam Devaraj as the lead actor in Sandalwood is both bold and beautiful. This is a film that takes its origins seriously. The content of the film is quite unlike what you see in regular commercial films across Indian languages. It is not just some romantic love story or some action adventure. It has real social issues as its core. And it does not fear from showing the truth. That is what makes Kumari 21F a special film.

The film has many layers. On the face of it, it is a love story. That is true. Pranam plays a chef who is at heart has a middle-class mentality about things social. He helps out a gang of friends in their escape from crime. His personal life is not too good with a difficult childhood with sparring parents. Enter the girl of his dreams as a neighbour. But the girl is too hot for him. He does not understand her. She does not make it easy for him either. So the yes and no continues for a time till the hero's mind is poisoned about the girl. Is she really the wrong type of girl or is it the thinking of the men that makes the girl look bad? The director explores this aspect.

The film takes a bold turn later in the second half. It is quite unlike what we see in regular commercial films. Then there is an explosive climax which is quite unexpected. Finally the film ends on a surprising note.

Pranam has made a very good debut. He can act, he can dance and he can fight. He has all the qualities of his elder brother Prajwal Devaraj and father Devaraj. He has inherited the right talent. The film is also a perfect showcase for Nidhi Kushalappa. She manages to win the hearts of the audience with her brilliant performence in a bold role that many would have feared to do.

Overall Kumari 21F is a special film for many reasons. It is one of those commercial films with a haunting message that should not be missed. A new hero has arrived and a new director has given an unusual film. It is now for the audience to appreciate it. The film also has some good music with the youngsters making the best of the foot-tapping numbers. Visually the film is eye candy. Do not miss it for anything.