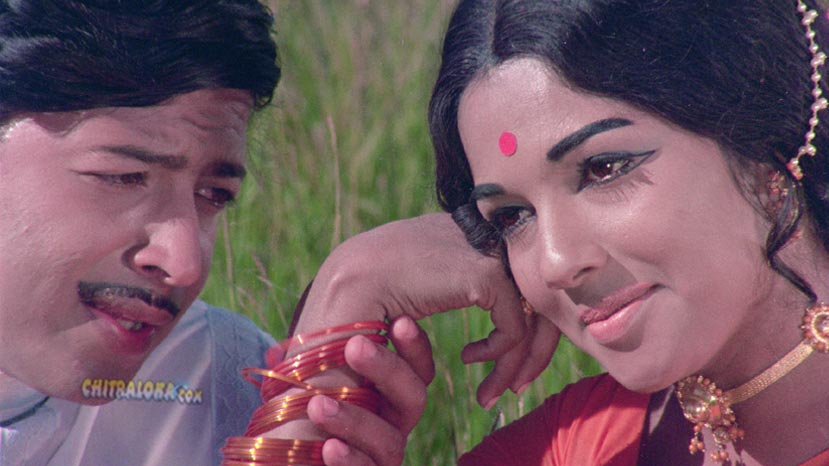 How do you take a classic and make it even better? Balaji has done just that. He has taken the film Naagarahaavu, produced by his father Veeraswamy 45 years ago and  given it a new twist. He has released it in cinema scope with digital sound. You have to watch it in a theater to see the magic. Naagarahaavu is considered one of the  greatest classics of Kannada film industry. Puttanna Kanagal's magical direction, the endearing image of the angry-young-hero Vishnuvardhan, the memorable characters derived from three novels of Ta Ra Su, great music by Vijaya Bhaskar and equally great lyrics by some of the greatest Kannada lyricsts including Chi Udaya Shankar, Vijaya Narasimha and RN Jayagopal made this film an evergreen classic.

Most of us would know the story. But here is the brief outline. It is the story of Ramachari, an angry young man. He is hot-headed and easily provoked. The film is based on three novels and is very exhaustive. The film however confines to the youth Ramachari and mostly his love life. Ramachari is happy to be in the local gym than college. His love affair with a friend's sister is doomed. He agrees to his favourite teacher's request and forgets her. When he falls in love for a second time, it is a bigger challenge to not only him but the society around him. The film has some of the best performances by each actor be it Vishnuvardhan in his first film in a lead role or Ambareesh who appears in a small but significant role, or Shivaram who plays Ramachari's friend or Ashwath in a career defining role as Ramachari's teacher.

Without going much into the story, what needs to be appreciated is the effort that has gone into restoring the glory of the film and enhancing it. The original film had mono sound. Even those who have watched it in later years will know that sound effect is not like modern films. Now digial surround system has been introduced. The music has been recreated with actual instruments so that it sounds true to the original. It is not only as good as the original but the digital effect enhances the visual appeal of the film also.

Visually also the film has got a great boost. The 35mm in which the film was shot has now been digitally increased to 70 mm. So you can enjoy the film on the full wide screen. What people missed 45 years ago, they can enjoy in all glory now. The film was visually one of the best. It is still remembered for the innovations that Puttanna Kanagala introduced. One of them was brining a slow motion and a real speed image side-by-side and matching them perfectly (in the Baare Baare song). There was slow motion even before that but no one had tried bringing slow motion and real speed on the same screen. Now you can watch that magic on 70 mm.

Every shot and scene of the original film has been retained. You will not miss a single thing. Even if you have watched the film many times before, watching it in its new format on the big screen gives an experience like never before. This revised film is one of the biggest contributions to the film industry a second time.