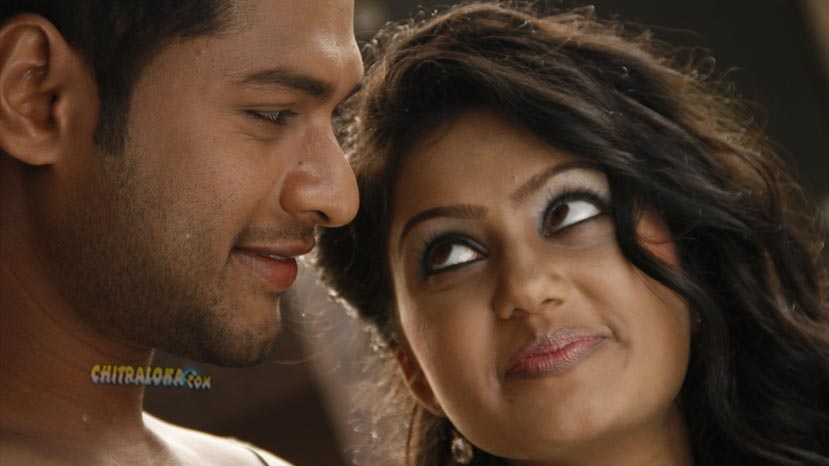 There is a good film this week by a talented team of newcomers. Rangbirangi has a host of newcomers in an amgalamtion of romantic emotions held together by some good directorial skills of Mallikarjuna Mattalageri. There are very few romantic films which explore the subject out of the conventional formulas. Rangbirangi is one of those rare breeds.

On the face of it the film seems like a normal romantic saga. But very soon you realise that the director and his team has gone to great lengths to script this one. There is a beautiful girl in the neighborhood and everyone from the student next door to the mechanic on the next street are head over heels over her. There are four principle characters that are in love with her. Unlike a caper comedy for example Friends where one group of friends fall for the same girl, here it is a disparate bunch of youngsters who fall for the same girl. Each one of their status, aspiration and dislikes are different. The only thing that bind then is their love for this girl.

It could have become an episodic formula film. But the director has managed to bring together diverse attitudes of love into a coherent film narrative.

Among the cast the newcomers in the main roles have done a commendable job. Sri Tej, Panchakshari, Charan and Shreyas have done their job more than well. The actress Tanvi has a charming personality matched by good acting skills. They can be easily identified as good acting prospects for the future.

The film is really a colourful exploration of the different wavelengths of love. The presentation makes it interesting. The cinematographer and the music composer Manikanth Kadri have given some more colour to it. Nandakishore and Raviverma are the cinematographers. Rangbirangi is not just a film for the youth. Audience of all ages can enjoy it even the parents of youngsters in love. Along with entertainment the film explores why youngsters act like the way they do when they are in love and also carries a message. It is blended nicely into the story without being preachy. Overall Rangbirangi is a film you should watch for its content and making.