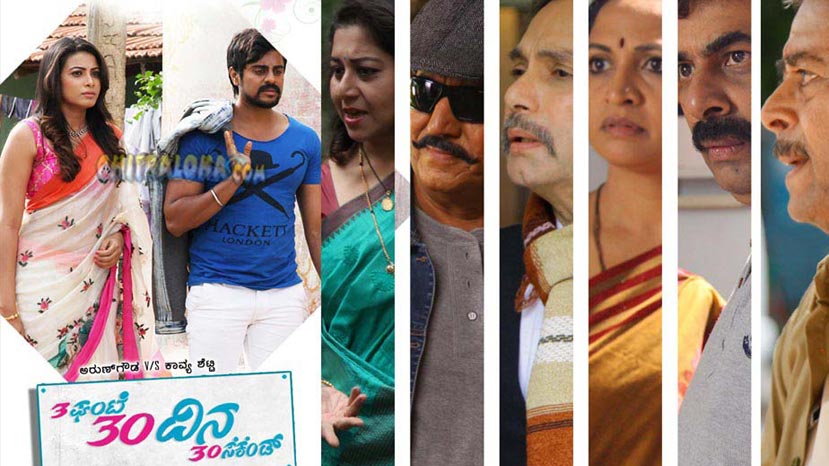 3 Gante 30 Dina 30 Second is a thriller, every second of it. It is several thrilling elements packed into one quick and fast narrative that gives goosebumps to the audience in every scene. The first scene is about how the hero solves a very complicated problem in just three hours. Then has faces the toughest challenge of his life and it is a personal challenge. He has to win this in 30 days. Most of the story is about this 30-day-challenge. He has to get a TV anchor to make him love him. She is also the daughter of the owner of that channel. She is immune to love because of various personal reasons. How our hero manages to convince her forms this romantic tale.

Finally there is also a smaller thriller he has to fulfill in the end. Overall the film is an entertainment package. Arun Gowda and Kavya Shetty play the lead roles. Arun is an advocate while Kavya is the TV anchor. They have great chemistry between them and it is a treat to watch them on screen. They are ably supported by the other cast that includes Sudha Rani, Devaraj, Chandrashekar, Sundar, Ramesh Bhat and others. The incidents and characters of Devaraj and Sudharani are special. Devaraj plays an army man who has lost his vision, hearing and speech also. He gives an amazing performance without being able to show his eyes or speak. It is an award winning performance.

There are also very good technical details in the film. The cinematography is top class. There are some good songs which add value to the film. Crisp editing by Sri and the narrative that blends emotion and thrill elements in one flow are major advantages for the film. All the various characters are perfectly put together in an engaging story. The film also has a good message in the end. The explanation for love will sometimes leave you confused but that is how love is; confusing to most people and beyond definition. Many people have tried to clearly define love and failed. This film encompasses all of them and more than that. Even if you agree with love or are against it does not matter. This film will entertain you with love.