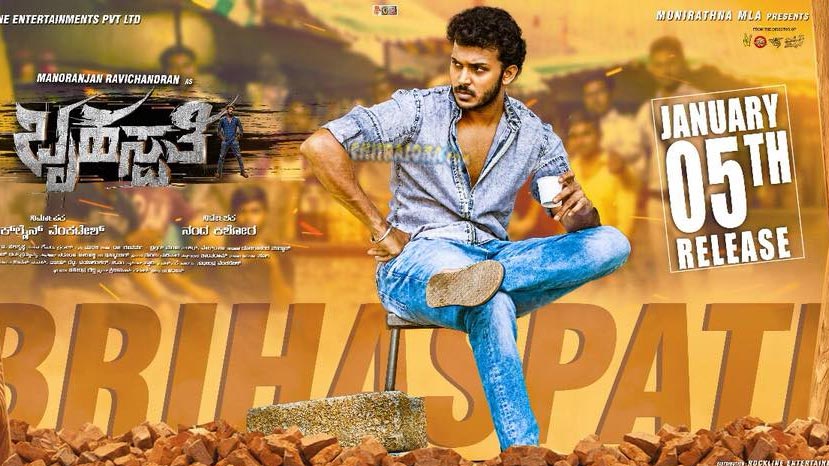 Bruhaspati is the Kannada remake of the Tamil film VIP. It is Manoranjan Ravichandran's second film after Saheba. He has improved leaps and bounds in this film. Bruhaspati has turned out to be a very good film and is a great start to Kannada films this year.

The story revolves around Sudheer, an engineer who is without a job. He has no backing in life and coming from a middle-class background he is unable to get himself into a good position in life. While his younger brother is earning handsomely Sudheer is left stranded. A girl moves next door and even she is earning good money in a job. It seems only Sudheer is the odd one. How Sudheer manages to make good of his life and start a career forms the rest of the story.

It is a simple story about ordinary characters but the story makes heroes out of the characters without being dependent on heroism or buildups. There are good songs and good camerawork and the story moves swiftly without diverting into unwanted territory. It is slick and there is no lag anywhere in the film. Even the songs are made to flow smoothly along with the narrative.

Nanda Kishore has made a good film and should be proud of it. Manoranjan as said earlier has improved a lot. His acting and dialogue delivery has improved a lot and he is perfect for the role. We can say a star is born with this film.

There is overall good acting from all the actors. Saikumar, Sithara and Sadhu Kokila stand out. Harikrishana has scored some good tunes and one that is sung by Puneeth Rajkumar is particularly catchy. Sathya Hegde has matched the delights of the screenplay with his camera work.