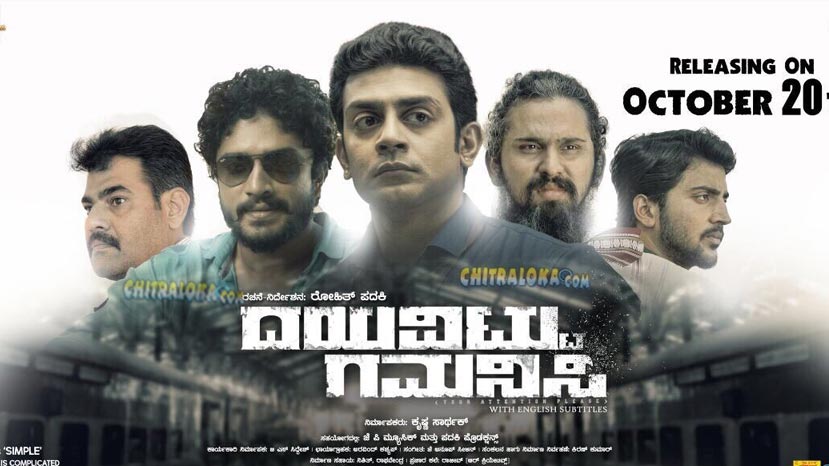 A film that is actually a collection of different short stories is not a new experiment in Kannada. Puttanna Kanagal tried that ages ago in Katha Sangama. It was an attempt to bring together short story literature to the big screen. It was a time when there was no Kannada television to make short stories into moving images. In Dayavittu Gamanisi, it is not literature works that is brought to screen but stories written for the film. There are four stories in the film which surprisingly come together in the climax. Until then the characters in each of them are complete strangers to the others.

The first story is about a man in his thirties who thinks he wants to lead a life without marriage. A proposal for marriage comes his way from an old person who is searching a groom for his daughter. But there is something strange and fishy in the details. The second story is about a thief who has no good life to speak of. The only way he knows to earn is by becoming a proxy for people on the wrong side of law. Such a person falls in love and the match can change him for ever. The third story is about a swamiji who has a past which is bigger than a book. His quest for what he is searching finds itself in front of his gate. But is the swamiji mature enough to treat it well? The fourth story is about a man who is frustrated at work. The work sucks away his personal and social life. Is his desparation enough to get him his life back?

These four stories each tell a complete story. There are many characters in each of them. The first story has Rajesh Nataranga, Prakash Belawadi and Ashwin as the main characters. The second story has Vasishta N Simha and Sangeetha Bhat as the main characters. The third story has Avinash Shatamarshan and Sukratha Wagle in the lead and the last story has Raghu Mukherjee, Samyukta Hornad and Bhavana in the lead. Rohit Padaki, the dialogue writer-lyricist has turned director with this film. He has turned out to be a good find for Sandalwood. His stories are simple yet profound. There are meanings to the stories that layer each other.

The other good things about the film are the music by Anoop Seelin and photography by Arvind Kashyap. Dayavittu Gamanisi is an interesting collection of stories and a very good experimental film in Kannada. Do not miss this season's new wave film.