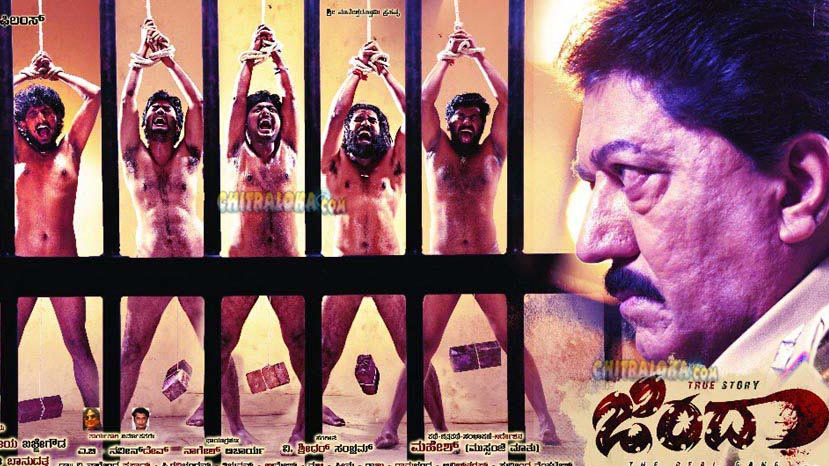 Jindaa has a rustic kind of subject that Mussanje Mahesh has chosen for this film. It is a raw subject with a mixture of crime and revenge aspects. It is a nice blend of old and new including the story, narrative and also actors. Seniror actors like Devaraj, Sundar Raj, Vijaya Kashi and Padma Vasanthi are matched against Meghana Raj, Yuvaraj, Arun, Lokesh and others. It is a heady mixture. For the Kannada audience it is a new kind of treat. Jindaa is a good effort at a new kind of film.

The film starts with a gang of six friends. The initials of their names forms the gang name as JINDAA. The young gang gets involved in small robberies and all of them except one is bad in studies. They are inseparable. Their lowly life gets a chance for the better when one of them passes the exam and gets a chance to go to college. Again the money comes from robbery.

From here on come the twists. The smart guy falls in love. It is opposed by his friends who are against love and marriage . But love becomes too much of an attraction and the one friend says he will leave the gang and friendship for the sake of love. He quits the gang and then ensures a fight.

Enter Devaraj a cop who wants to put an end to the gang. Many aspects of the story open up from here. It is a suspense, revenge and lots of action from here. This is the best portion of the film. The fight within the gang, the cat and mouse game with the cop Devaraj and tension fills the story. Mahesh has handled the story nicely and gives ample scope to all actors.

From the story point of view as well as the acting part Devaraj is the hero of the film. There is no doubt that he is one of the best actors in Sandalwood. He proves once again why he is so. He is a perfect inheritor of the title Nata Bhayankara. Meghana Raj gives a very good performance and steals the show towards the end.

From a slow start the film picks up pace and goes towards a thrilling climax. The technical team is also handled very well and makes for a good film. One of the better films this year that you should not miss.