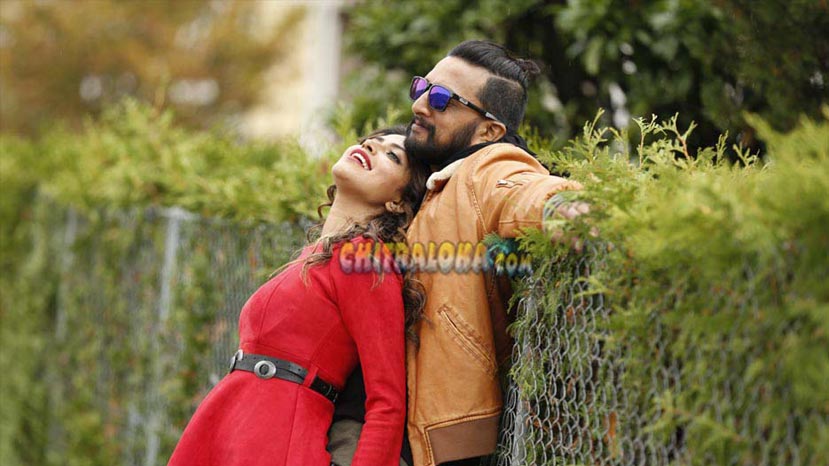 Hebbuli has lived up to its hype. It is an action packed film that keeps the adrenaline pumping from the first scene to the last. It has a huge star cast and there is a twist and turn every other scene. New characters are introduced and apart from action, the stunning locations, family sentiment scenes and songs keeps the audience entertained every minute.

Those who were stunned by the hype the film had created will be stunned by what the film offers too. It is a huge canvas. The making is on par with the best you will see in any Indian film. At times, it looks like a Hollywood production.

The film starts with a surgical strike inside Pakistan by an Indian Army paratrooper team led by Captain Raam (Sudeep). Indian hostages are rescued, including the heroine (Amala Paul) who is a doctor. But there is a stunning change in the flow with news arriving that Raam's elder brother (Ravichandran), who is a IAS officer has died. But there are so many suspicious things about the death. Partly in flashbacks, the relationship between the brothers is revealed and also what the IAS officer was up to.

Raam tries to get to the bottom of the issue but he faces one obstacle after the other. Does the soldier who is ready to sacrifice his life for the country able to avenge his personal tragedy? That is what Hebbuli is about.

Sudeep is in a league of his own. His expressions as an angry man and then as a sentimental brother is seen to be believed. He fires up the screen with his acting. Ravichandran is superb in his role as an honest IAS officer. Amala Paul, Kaveri, Ravishankar, Ravi Kishan, Avinash and many others provide brillilant support to the screenplay. Overall the film is a perfect package for everyone.

There are punching oneliners that will cheer the fans and thrilling investigation and action that will create awe in those who watch the film. The locations from Kashmir to Switzerland are stunning. The making is top notch. Krishna has also managed to give a beautiful message to the society about a real burning issue that will make you sit up and think. Both as an entertainer and as an film with a mission, Hebbuli wins. The film will no doubt make a big mark on the industry.