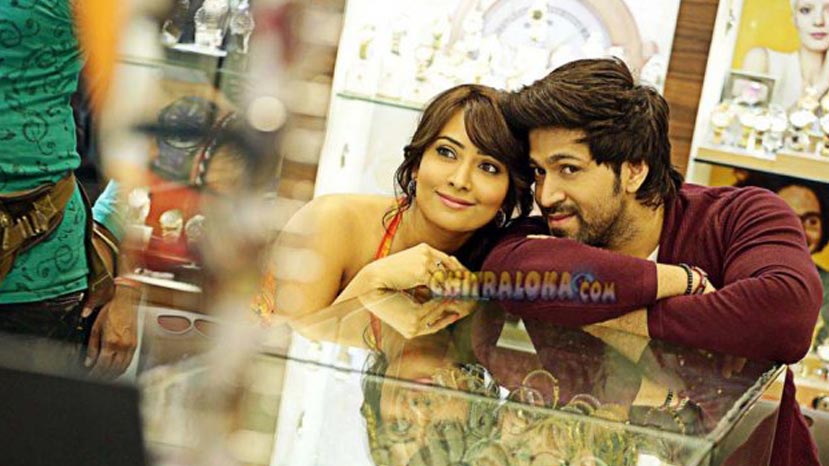 Santhu Straight Forward is a cracker of a film that is the perfect way to celebrate Deepavali. Great songs and dance, brilliantly choreographed stunts, a great chemistry between Yash and Radhika, a team of seasoned actors and an interesting storyline makes for an engrossing film that will leave the audience stunned and wanting for more.

The film starts with the introduction of Deva a smart and ruthless businessman played by Tamil actor Shaam. Then comes the introduction of Yash in an elaborate and stunning fight followed by one of the most innovative songs in recent years. He is introduced in a song featuring nine film villains. Yash falls in love with Radhika but both of them have mistaken identities. He thinks she is a thief while she thinks he is a rapist. By the time the confusion is cleared they are in love. But wait that is just the beginning of the story. The real challenge to their love is to start. Radhika is already arranged to be married to her maama Deva. How Yash managed to salvage the impossible situation forms the rest of the story.

The film has some of the most amazing visuals seen in Kannada screen. The songs shot in Norway are eye catching. The songs shot on sets are also lavishly mounted and feels great to watch. The camera work is brilliant and provides a rich canvas. The pair of Yash and Radhika look like a fair and lovely team and are a treat to watch.

Santhu Straight Forward has everything you expect from a blockbuster. It is rich, it is lavish, it is entertaining and gives an immersive experience. Don't miss to watch it this Deepavali. You will ask for more.