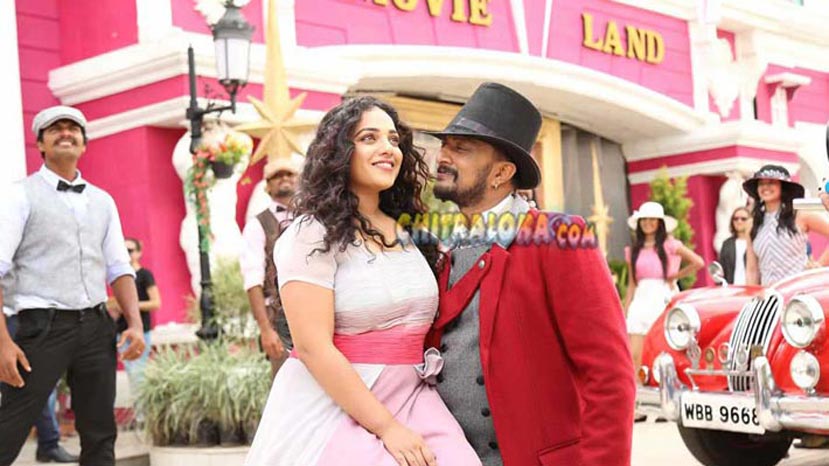 Kotigobba 2 is a superb entertaining film that is more than paisa vasool. With a combination of a thrilling plot, great acting, chilling action sequences, great music, comedy ingrained in the story and an engaging screenplay, the film is good for all age groups. From the very first scene, director Ravikumar manages to keep the audience hooked on to the proceedings.

The film starts with a heist and we know that Shiva (Sudeep) is the mastermind behind it. But the person who has lost loads of cash does not complain to police as it is black money. But shady characters and evil policemen are behind him. Shiva pulls of another such heist and the whole world is behind him. In the meantime, he is also acting as a real estate dealer and posing as his own younger brother but a very good person. He manages to mislead people that there are two persons. But can he go on very long with this dual image.

The entire film is about how the hero manages to dodge the villains and the policemen and stays ahead of the game. It is an open story and you know the hero has to win in the end. But it is the thrilling experience that keeps the audience engaged. The hero with shades of grey are not uncommon. But the flashback on why he becomes like that is quite believable and gives a dramatic touch to the film.

The film also has a nice love story and a comedy track that is blended nicely into the main story. The music by Imman is also very apt for the film and gives the film a class touch. Nitya Menen, Ravishankar, Chikkanna, Sadhu Kokila, Avinash, Naseeer and a host of top character artistes give the film an heavy look. Though the film is two hours and forty five minutes long, there is no boring moment or scene. Each scene is made entertaining and that is the most important thing. The power of money, the power of entertainment and power of Sudeep is all on display.