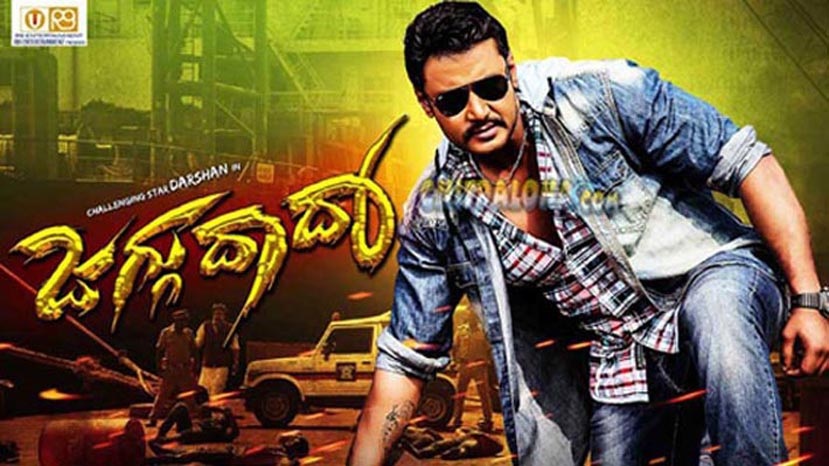 It is very rare for top stars to do a full-fledged comedy film.  But Darshan has done it and done it in style. JagguDada is an immensely entertaining film that is a feast for his fans. The macho image of the star is also kept in mind and there is some terrific action sequences also that will everyone hooked. Moreover going by the trend of recent films in Kannada with horror themes that have become hits,  there is also a ghost in this film. But this is not a scary ghost. It is an entertaining ghost that is funny. Overall the film is a perfect film for fans as well as family audience.

Darshan plays Jaggu Dada who comes from a family of dons. It is their family tradition. While his mother wants him to become an international Don,  his grandfather wants him to become a normal person. He ends up becoming a Don. His grandfather dies and as a ghost forces him to search for a good girl to marry. Scared by the ghost, Jaggu Dada begins his search. But there is a problem. Because he is a Don,  everyone fears him but don't want a relationship with him. How does Dada manage to find a "susamskruta" girl with such a background? That is what the hilarious story goes on to explain.

From there on the film goes on a fun filled ride. It is clear that everyone enjoyed making the film. The audience also enjoys every bit of it.  Darshan is dashing as a Don and stylish as a businessman. He impresses in both getups. Deeksha Seth is in a cute role. She makes a for a charming presence and makes an impressive debut in Kannada. The other significant acting is by Srujan Lokesh,  Anant Nag,  Urvashi and Bullet Prakash.

When it comes to the technical crew, the camera work by Venu and music by Harikrishna is superb. The editing could have made the film shorter. The locations of the songs in Pompeii and other scenic locations are mind-blowing.