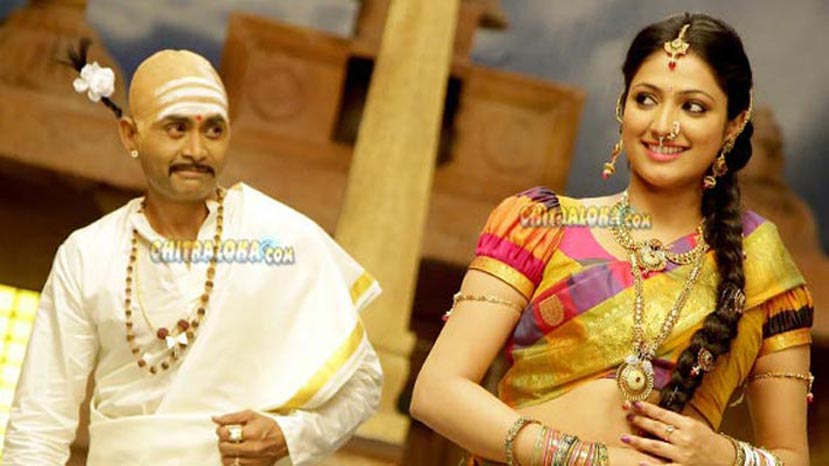 For Sharan's new film Bullet Basya, there is no other purpose but to entertain. The Jayateertha directed film tries to get the audience in laughs from the first to the last scene. Even if it is a song, fight, dialogue or plot, everything is devised to evoke laughter. The film succeeds to do that to a large extent. Sharan also plays a dual role in the film which is a treat to his fans and double the fun. Jayateertha has also deviated much from his earlier films which were realistic and turned to a comedy-at-all-cost film. Therefore the film is not logical always. But that was never the purpose even.

Bullet Basya is the lord of a village. His family has a big history for the wrong reasons and the character is the villain. However the film tries to make a comedy film with such a lead character. This is something special and probably never tried before. Basya is a womaniser and wants to bed every woman he likes. But he falls in love one fine day and things change. The problem is that the girl is engaged to another person who is Basya's lookalike. To get the girl to marry him Basya tries every trick in the book. Does he succeed is the basic plot of the film. But there are dozens of other characters who get into the story and most of them are there for the sake of comedy.

Sharan has written the story for this film and this is his first such attempt. He succeeds. But it is Jayateertha who shows that he can handle any kind of subject. It is a surprise how well he manages to turn around a simple story into an interesting and lively visual treat. Haripriya looks gorgeous and looks stunningly beautiful throughout the film. Sharan excels in both roles. Good songs, visually appealing locations and glamorous settings make the film a good watch. It may not have much of a story but if you want entertainment you can safely watch Bullet Basya.