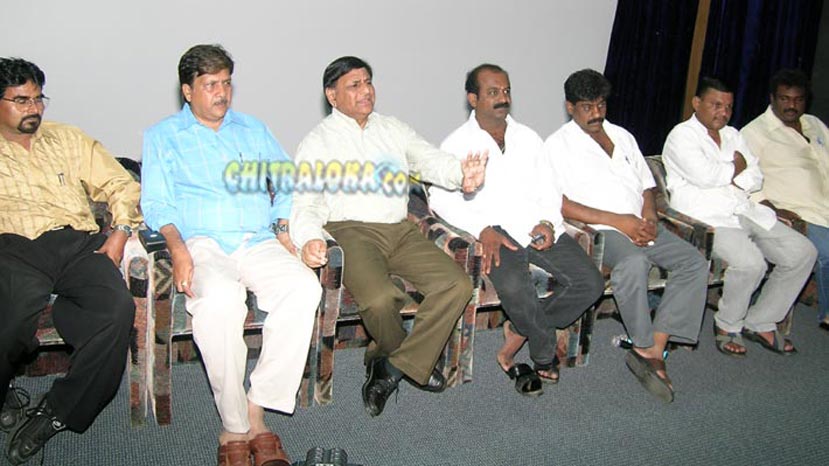 basanth kumar patil and others addressing the media

The Kannada film producers association President Basanthkumar Patil, Kannada film directors association President S.V.Rajendra Singh Babu in a joint address condemned the attitude of Karnataka Film Chamber of Commerce and sought immediate action on Innovative Multiplex. They charged the chamber President for applying double standard. All the non Kannada films showing especially in North Karnataka must be called back and the seven weeks moratorium should be followed was the voice raised at the media briefing. T.S.Nagabharana, Jaggesh, Madhusudhan Reddy, Nanjunde Gowda and Ramesh Yadav have also joined in this joint call to Karnataka Film chamber of commerce.

As reported in these columns the producer sector members of Film chamber tendered their resignation for the over all developments of attack on media, showing the non Kannada films and goonda activities expressed by some of the exhibitors. Despite of undertaking given Prasad of Multiplex theatre showed the guts to screen non Kannada films. How can this happen without the support of Karnataka Film Chamber of Commerce President asked S.V.Rajendra Singh Babu.

The watchdog committee appointed sometime ago to look into has been dissolved and a new head Kannada Somu has been elected to look into the breach of agreement made by the non Kannada films showing exhibitors. The remaining members for this committee would be announced in the evening.

It was also announced to hold Jatha all over Karnataka to protest against the developments.

In the morning the scribes in Bangalore converged at the Mahatma Gandhi statue to condemn the attack on journalists at the Innovative Multiplex theatre on Saturday. Anand a news photographer from Deccan Herald urged for immediate suspension of Ramaiah the inspector of HAL Police station. Even after showing the identity card that he is a journalist he behaved shabbily. The news photographers and other scribes who assembled in large number shouted slogans and expressed their dissent.