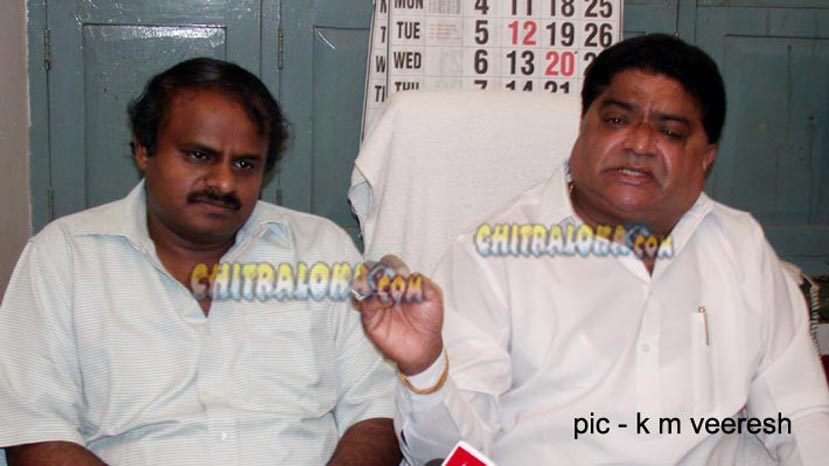 In another move the director of ‘Preethi Prema Pranaya’ Kavitha Lankesh sister, editor of ‘Lankesh Patrike’ Gauri Lankesh fired a complaint letter to Karnataka Film Chamber of Commerce seeking protection for the smooth screening of ‘PPP’. The President of KFCC has forwarded this letter to Commissioner of Bangalore Police (see the copy of letter in Chitraloka web site).

The noted producer and politician Kumaraswamy has made it clear that the newly formed Vedike is not against anyone. Instead of becoming laughing stock we are progressing for amicable settlement of the issue. The KFPA members who are issuing statements for withdrawal of prints and bundh are not facing the real heat. Because none of the members films are running at present. Their business is to just going on giving statements says HDK.

The Exhibitors Association that is hell bent on meeting their demands is quiet and clear in their demands. On Friday all the films are running as it is in city theatres and elsewhere. None of the producers came to any theatre and took away the prints. The Kannada Film Producers Association has once again taken a wrong step from stating that the prints from the theatres have to be withdrawn. This is unjustified. It is not easy to take away prints says the sources at Exhibitors Association.

Friday the ‘Varamahalakshmi day’ had no new film releases. The Hindi film ‘Koi Mil Gaya’ starring Hrithik Roshan, Telugu film Seethaiah, English film ‘Mr Bones’ also could not release. Some of the English theatres screened the Hindi films from this Friday. The Hubli area is not releasing the new films from last week. ‘Mane Magalu’ bought for a good price is struggling to get released in Hubli area.

Meanwhile the KFPA also seriously discussed for two and half an hour. The KFPA has decided to seize the prints from all theatres from Saturday morning. Smt.Parvathamma Rajkumar has taken back the ‘Abhi’ film print from Narthaki theatre. The KFPA is asking the Cable operators to stop their activity. It is learnt that the 100 days function of ‘Abhi’ Kannada film of Dr.Rajkumar banner scheduled for coming Tuesday has been cancelled. The shooting activities also come to standstill from Monday says the sources to Chitraloka.