Feeling that Sudeep Would Accept this challenge - Rajamouli 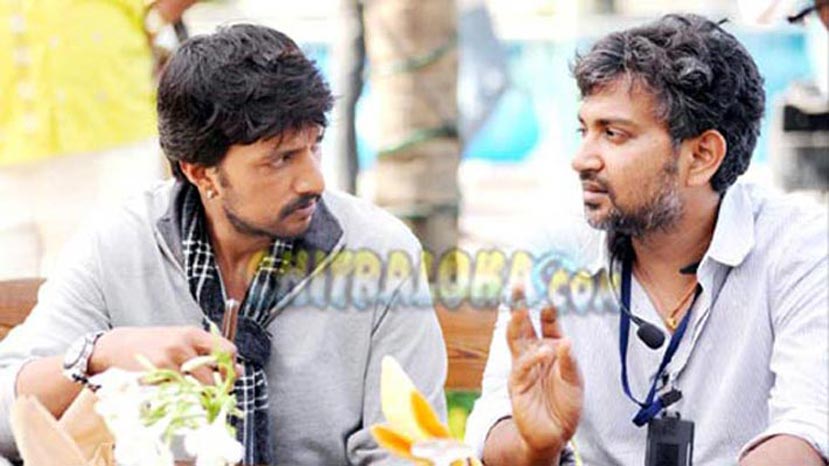 Well known film director S.S.Rajamouli's forthcoming film Eega has already been creating big waves in the Indian film industry.  The trailers have made a very big impact with top technicians like Ram Gopal Varma and Anurag Kashyap tweeting in appreciation of the trailer and  the performance of  lead actor Sudeep who is playing an antogonist's role in the film.

But many people are still wondering as to how Rajamouli was able to convince talented actor Sudeep who was already a super star in Kannada film industry to play an antogonist's role in the Scientific thriller film with relatively unknown stars.

S.S.Rajamouli has himself answered this question in a conversation with Chitraloka Portal.

Rajamouli says that he had known Sudeep was  A SUPERSTAR IN the KANNADA film industry and he had not met him before an approach was made for Eega.

"I SAW RGV directed 'RANN' AND WAS BLOWN AWAY BY HIS PERFORMANCE. I DIDN'T KNOW WHETHER HE WOULD AGREE TO DO A ANTAGONISTS ROLE OR NOT, but FRANKLY I HAD A GUT FEELING THAT HE WOULD ACCEPT.BECAUSE AN ACTOR OF HIS POTENTIAL WOULD LOVE THE CHALLENGES OF THE ROLE IN EEGA' said Rajamouli .

Regarding the exact date of release of his much discussed film, Rajamouli says that the guessing game is being done in the media circles.  He says both the films  Ee and its Tamil original version  Naan Ee will be released simultaneously in the country and in abroad tooo.

'EXCEPT FOR SOME MINOR PATCHWORK WE COMPLETED SHOOTING IN JANUARY. .IT IS THE HUGE Level  OF CG work for the film that  IS TAKING MORE TIME THAN we had EXPECTED.  Now, I can surely say that we can not release the film in April.  .APRIL IS RULED OUT.BUT WE ARE DEFINITELY COMING IN MAY'  says Rajamouli who however does not speicify the date of its release.