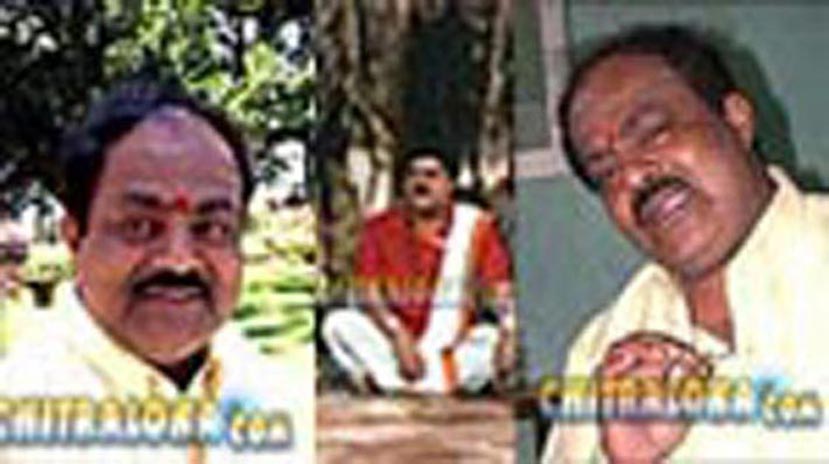 Highly acclaimed actor of Kannada cinema Srinivasamurthy an excellent performer on stage, cinema and TV is now beginning his second mega television serial ‘Pathala Bharivavi’ a children fantasy for ETV Kannada channel after the mega hit of ‘Anna Basavanna’. ‘Pathala Bharavi’ based on Kshemendra Bharathi’s Sanskrit book is the base for Srinivasamurthy for his 52 episodes television serial in which he plays a Mantrik.
He had already chosen the ace cameraman Santoshkumar who worked in the camp of Ramanand Sagar and it will be a treat for the children especially promises Srinivasamurthy.
While speaking to Srinivasmurthy on his current project the subject of his much ambitious project ‘Anna Basavanna’ automatically passes through in the discussion. Srinivasamurthy is ‘Basavanna’ the 12th century reformer for the people of Uttar Karnataka. The 70 episodes television serial ‘Anna Basavanna’ concluding on April 14 in ETV has become a household must watch in the Veerashaiva community too.
Drawing his memory to 21 months ago Srinivasamurthy recalls that he had given the project of ‘Paathala Bhairvai’ to Mr Manvi and Surendranath of ETV and accidentally he referred the subject of ‘Anna Basavanna’. Thrilled with the concept and structure of work the ETV bigwigs immediately asked Srinivasamurthy to go ahead with 12th century reformer. Thus the work began on a fast phase occupying nearly 20 hours of Srinivasamurthy per day.
With Sri Thipperudraswamy’s ‘Kartharana Kammata’ the widely accepted book on Sri Basaveshwara Srinivasamurthy began his love affair with the project. He also referred Siddayya Puranik’s ‘Sharana Charitamrutha’, Vishwanath Reddy Mudnal’s ‘Arivu
Achara’ came to his help. Each episode took a maximum of five days to shoot and it was made at a cost of Rs.2 to 2.5 lakhs, the highest expenditure so far in Kannada TV world per episode. Srinivasamurthy had given work for nearly 350 people for 300 days and the total investment made on ‘Anna Basavanna’ reaches Rs.2 crore.
I cannot forget ETV management. They have given me the best facility and I have got laurels in my life only because of them. Had ETV not made up their mind, it would not have been possible.
Depicting the life and work of saintly personalities encountering the opponents is obvious. Srinivasamurthy faced some leading persons in checking his work but the same persons cleared the hurdles. Like wise he purposefully avoided the superstitious in his ‘Anna Basavanna’ and picked only that are relevant to our social set up. But ‘Pavadas’ did not leave him. While shooting he faced many ‘pavadas’. The rain lashing in the month of March to pave way for his shooting, the mist arrival at a place where it had not come, the Harijan colony in Deshihalli village near Maddur Taluk not getting rain and water had in fact sacrificed animals for it. But when ‘Anna Basavanna’ shooting was done there the rain lashed that area and the water got filled in the ponds resulting in easing the difficulty of the Harijans. That’s why the people in Harijan colony named that area as ‘Anna Basavanna’ colony.
The change of faces in small screen when mega television serials are underway has become almost common. But when senior KAS officer (now heads the Kannada and culture department) Somasekhar demanded a prominent role Srinivasamurthy obliged with ‘Basaveshwara’ right hand role of Bacharasa. After few days of shoot the bureaucrat was missing for important shooting sequences. This has irritated Srinivasamurthy. He had to use dupe for him. Actress Shruthi (nor senior actress Shruthi) a new comer did not leave Srinivasamurthy free from problems.
With all this developments and transformation of ‘Anna Basavanna’ in small screen Srinivasamurthy had seen senior swamiji’s like Murugod Math appreciate him for his work. But when it comes to TRP rating Srinivasamurthy is angry. The system of choosing people for TRP is wrong he says. Every house in Uttar Karnataka district watches ‘Anna Basavanna’. But unfortunately it has not figured in TRP.
He concludes by saying that he had seen a vast change in his outlook and temperament in his life. This refinement is possible only after I took up ‘Anna Basavanna’. The direction and acting in ‘Anna Basavanna’ has also made me rich admits Srinivasamurthy.