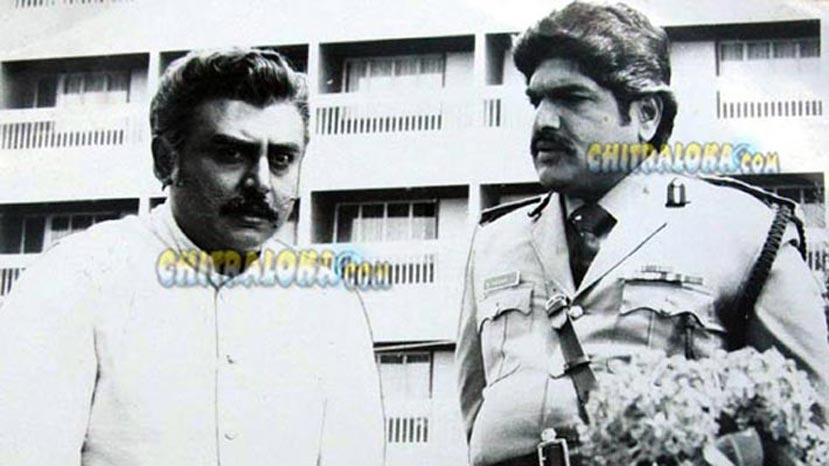 Mukyamantri Chandru acted in more than 475 films before turning to politics full time. But unlike him, Dinesh and others, there are Kannada on-screen villains who continued to play only negative roles mostly and made their name and fame.

Vajramuni, Toogudeepa Srinivas, Shakti Prasad, MP Shankar and others remained most sought after screen villains for many years. Toogudeepa Srinivas entered the film industry with the film Toogudeepa directed by KSL Swamee in 1966. Srinivas became popular for portraying the negative roles in a unique manner. He shot to fame as Mangal Singh in Sipayi Ramu. In Ramapurada Ravanaru, he went beyond playing the villain. Dhruva Taare, Ade Kannu, Benkiya Bale, Shravana Bantu are some of his other popular films.
Vajramuni made his debut in the year 1969 in Mallamana Pawada directed by Puttanna Kanagal. The next year he was cast by Puttanna in Sakshatkara. Later from Sipayi Ramu onwards, he became a regular in films of Rajkumar. In 1974, he played a role that was equal to that of the lead pair, Rajkumar and Manjula in Sampattige Sawal. Bahadur Gandu, Babruvahana, Mayura, Daari Tappida Maga, Kalla Kulla, Gejje Pooje, Girikanye, Gandaberunda are among his most memorable films among the over 300 he acted in. He also turned producer with Brahmastra.

Sudheer entered films with the character Pailwan Sanganna in Maadi Madidawaru. He did roles in films like Nanjunda Nakkaga, Veera Sindhura Lakshmana, Halli Haida and others. But he never lost touch with professional theatre and continued to act in a large number of plays. It was MP Shankar's Rama Parashurama that gave a new direction to his film career. After this film, he became a regular in negative roles in films with Manku Timma, Narada Vijaya, Nee Nanna Gellalare, Haavina Hede, Keralida Simha, Sahasa Simha showcasing his acting skills.