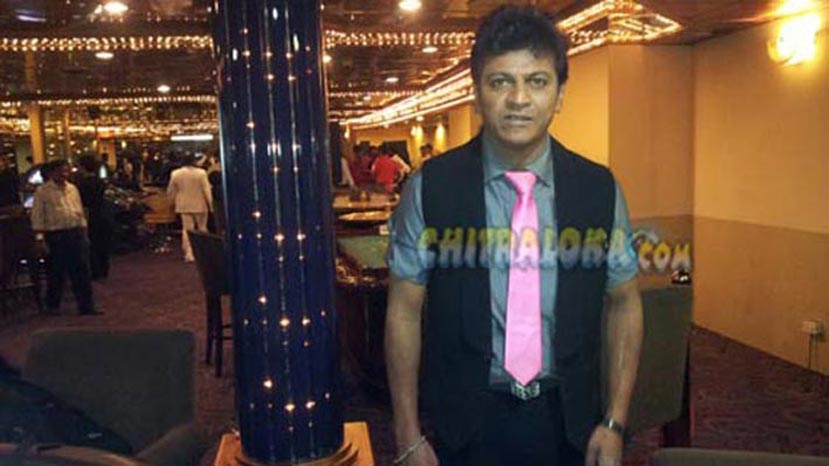 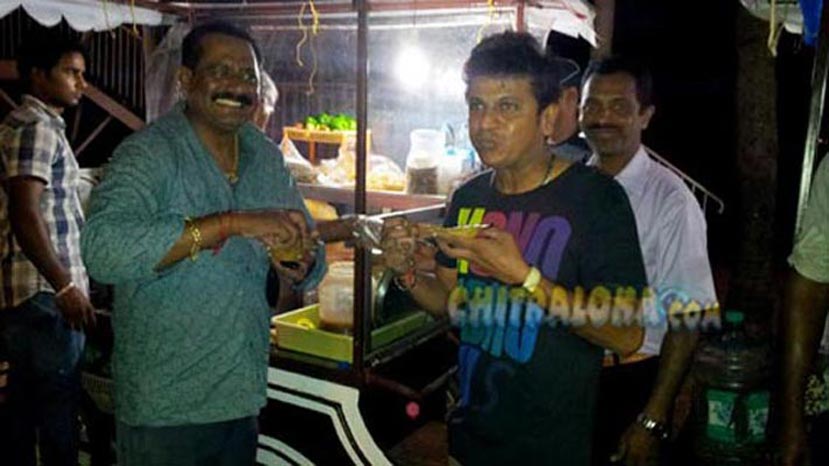 On 13th August, Shivaraj Kumar and Priyamani will be flying to Switzerland to participate in a song sequence of the film.  All the portions featuring Shivaraj Kumar and Priyamani will be concluded with the picturisation of this romantic song.  Later an item song is being picturised featuring Raagini and the villains represented by Ashish Vidyarthi and others.
With the completion of this song, the entire shooting work of Lakshmi would have been finished. 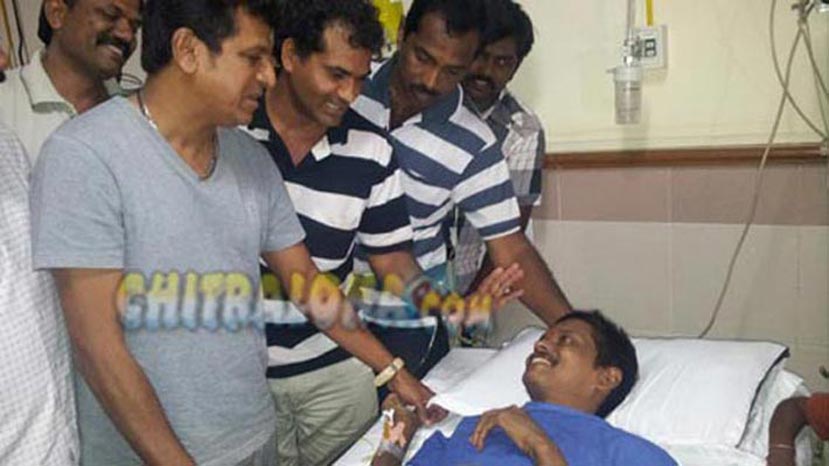 Century Star Shivaraj Kumar completed the shooting of his film Lakshmi in Goa and had returned to Bengaluru.in his own transport. While coming back to Bengaluru, he stopped at Hubli to see his ardent fan Madivalappa who had been admitted to Hospital after falling and sustaining serious injuries in the body.  He went to the Hospital where Madivalappa who was being treated in KLE hospital in Hubli and assured his fan of all the help needed for immediate cure.  Since Maalingappa was uable to meet the Hospital expenses, Shivaraj Kumar assured the doctors that he will be of help to his fan.  He also requested that the best of the treatment is given to the fan.

Shivaraj Kumar peresonally met Dr. Mahesh, the Senior doctor who was attending Malingappa and requested him to give the best of treatment to his fan. He also assured Madivalappa that he will take the responsibility of educating the children.

Speaking to Chitraloka Mega Portal from Hubli, Shivaraj Kumar said that he had taken the root from Goa to Bengaluru in the Car mainly because he really wanted to see the ailing Maalingappa.  'I really wanted him to recover fast from all his injuries and pain.  I pray god that he is relived of all the pain within the shortest span of time.

He knew that Madvialappa is a big fan of his family starting from Appaji to Appu and was regularly seeing all the movies.  I assured him that the best treatment is given to him' said Shivaraj Kumar. 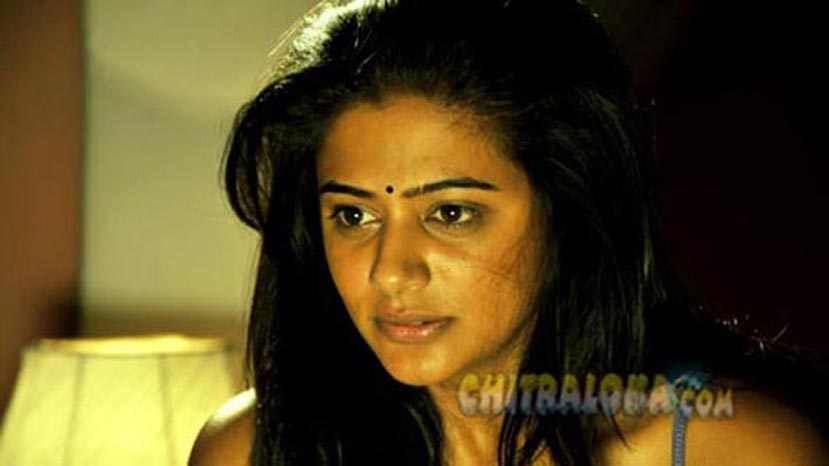 Dwarakish Chithra's new film Charulatha directed by Pon Kumaran who had earlier directed  Kiccha Sudeep's film "Vishnuvardhana' has done a remarkable job by getting the remake rights of the Thai Korean film Alone on which Charulatha is based.  The Tamil and Telugu versions of the film is produced by different portions.

While most Indian filmmakers including the Kannada film producers copy foreign films without any hesitation and take credit for story and screenplay, we are now seeing a director who has the courage to accept that he is remaking a popular foreign film. Incidentally, Pon Kumaran is also the director and producer of the Telugu and Tamil film.

Alone (2007) is about a deceased Siamese twin returning to haunt surviving sister. In Charulatha, Priyamani plays the role of conjoined twins. The film is directed by Ponkumaran and it is to be released in Telugu by Geetha Film Distribution.

We should appreciate the makers of Charulatha for buying the rights from original movie instead of copying like scores of other filmmakers. 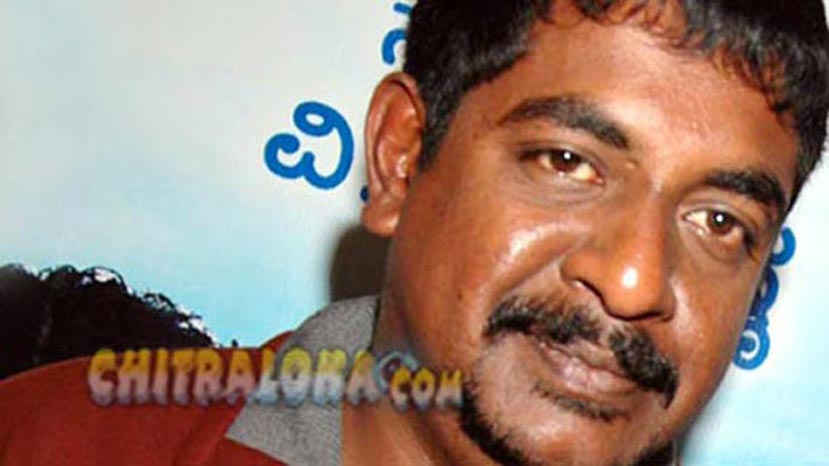 Well known fim director and lyricist Yogaraj Bhat lost his elder brother Prakash Bhat who was extremely sick for  the past two years. It is understood Prakash who was ailing from many days.   Yogaraj Bhat was looking after his brother and is now in deep sorrow over his brother's death.

After completing the formalities of  the ceremonies, Yogaraj Bhat is back to work to supervise the editing work of his forthcoming film Drama.  He was in his office working just three days after the death of his brother.

Jayanna, the producer of  Drama says that Bhat is back in work and his time table for release of the film in september last does not get altered.  He is planning to release the film's audio some time later in the month of August. 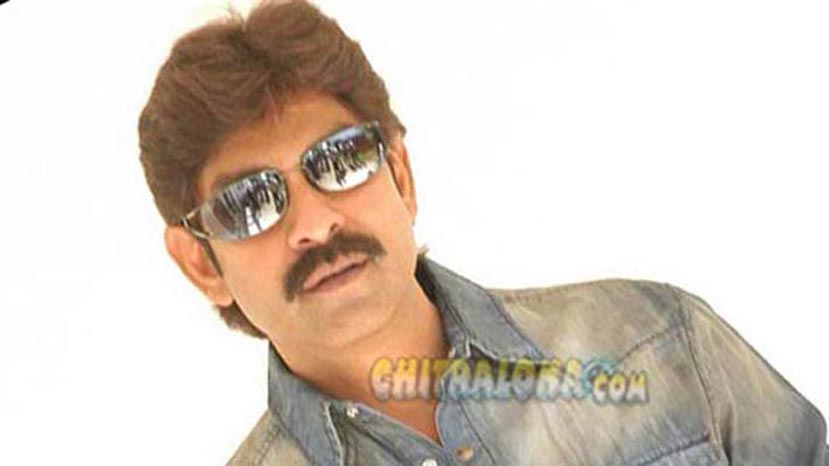 Bachchan will be Jagapathi Babu's debut in Kannada films. Jagapathi Babu has been a good friend to many Kannada artists including  Arjun Sarja, Sudeep  and Shivaraj Kumar,  He has attended several film muhurath's in Bengaluru including Chiru Sarja's debut film "Vaayuputhra' produced by his friend Arjun Sarja.

Kiccha Sudeepa has welcomed Jagapathi Babu to the Kannada film industry and has even recorded his appreciation for the actor in his twitter page.