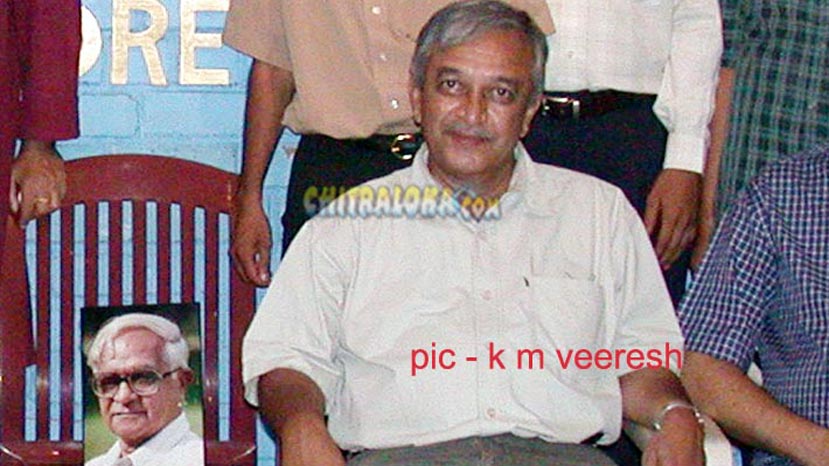 For each of us there comes a moment when death takes us by the hand and says – it is time to rest, you are tired, lie down and sleep – This has come to a dedicated journalist of the state today. That is G.S. Sadashiva the pride of Express group of publications.

While GSS is familiar poet and Rashtrakavi award winner in Kannada literary circle GSS of journalism circle – G.S.SADASHIVA has completed his journey on earth on Tuesday night. The Executive Editor of Kannada Prabha news daily GSS was ill from the last three months.

Mild mannered very efficient journalist of nearly four decades GSS as he was affectionately known was 68 years. He leaves behind his wife Geetha and a daughter. He was honored Rajyotsava award by the Karnataka state government very recently at his residence.

G.S.Sadashiva never harmed any person in his career. Those who took good direction from are many in journalism and social life.

He was very intelligent in identifying the beauty in personality and reciprocated in the right manner. His short stories and novels have been very popular too in the Kannada literary circle. From the days of 'Samskara' he associated himself with the quality and path breaking Kannada films. He worked as advisor to the acclaimed Kannada film 'Mouni' directed by B.S. Lingadevaru. GSS was a very good friend of Dr.U.R. Ananthamurthy the Jnanapeeth award winner. GSS was instrumental in convincing URA to give a nod of his short story 'Mouni' for adaptation on big screen.

In the beginning days of 1995 in Kannada Prabha he started off with a witty column that was very caustic in its inner sense. Writing editorials on socio and economic development was an easy task for GSS in his service at Kannada Prabha daily. Humor was his forte. He followed mentor late Mr YNK in cracking jokes in every sentence.

Mr GSS was a voracious reader of newspapers, Kannada books and English publications. He was a very cool at hearing to other what they say. Upon this improvising the standards adding some spice to it he learnt from his early days in journalism.

After the marriage of his daughter the one thing that bothered GSS was driving the car from home to office. He believed in home food but smoking was a permanent companion for him. Smoking cigarettes at regular intervals perhaps bothered his life. But he was enjoying it till recently. He never remained at distance from the circle of friends. He has never drawn a line of demarcation. He was called as 'Ajathashatru' in his official circle. Controversy was afraid to come near to him.

GSS of Journalism is no more. He was a friend, philosopher and guide to many persons in Karnataka. He was instrumental to many of the present crops. K.M.Veeresh, Editor of Chitraloka mega portal remembers his late 80's days when GSS was heading the 'Sudha' weekly magazine. The encouragement Veeresh got in those days has drawn him to journalism.

The body of GSS will move to his residence from Shekar Hospital in Jayanagar 9th block. The cremation is expected to take place on Wednesday afternoon.

May his soul rest in pace. He was an absolute peace loving personality. Chitraloka joins the innumerable in condoling the death of this veteran journalist GSS.