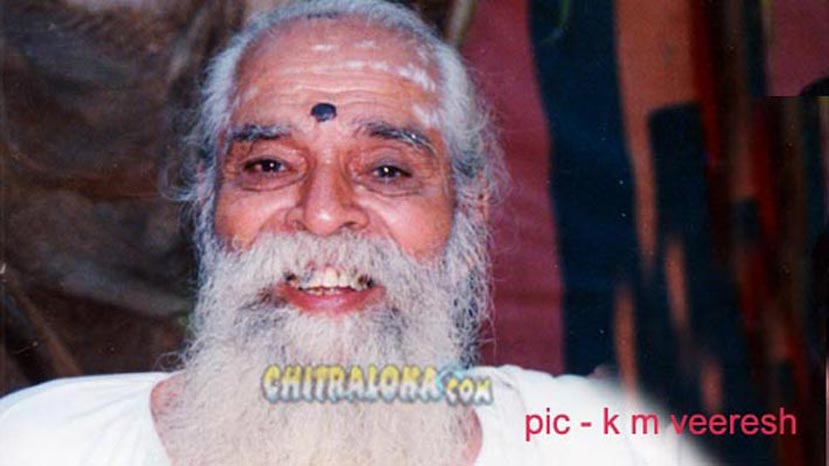 The crowning glory of Kannada cinema G.V.Iyer the committed director of repute at the national and international level died of kidney infection at Mumbai on Sunday at 6 pm sources reaching Chitraloka has disclosed. His body will reach Bangalore at 5.30 am on Monday. For the paying the final respects his body will be kept at Sri Bharadwaj Ashrama his residence at Ramohalli on the outskirts of Bangalore. Iyer had been to Mumbai to complete the dubbing formalities for his television serial ‘Bana Bhatta’ novel.

Iyer the barefoot Brahmin the ‘Bhishma’ of  Kannada cinema is undoubtedly the stalwart. He made debut as an actor from ‘Radharamana’. At the age of eight he came walking with his father to Nanjangud to join the Gubbi Veeranna theatre group. After a strong stay in the theatre Iyer acted in the debut film of Dr.Rajkumar – Bedara Kannappa. The other films he acted are Mahakavi Kalidasa, Sodhari, Hemavathi and Hari Bhakta.

An orator in Kannada and Sanskrit Iyer acquired the major distinction in 1975 when he directed ‘Hamsageethe’ (music by Dr.Balamuralikrishna and B.V.Karanth) the mellifluous musical film starring Ananthnag that had only 18 minutes of dialogues has been the root cause for many of the musical films made later in Indian cinema. Dr.Balamuralikrishna had lent his voice for all the songs in this film that was rated high even to this day. Acquiring the position of team leader, this ring master controlled on all areas of film making and never left void or shortcomings in his makings. His commercial films like Dashavathara, Boodhana, Post Master, Kiladi Ranga, Rajasekhara, Mysore Tanga, Chowkadha Deepa, Nalegalannu Maduvavaru got him recognition in commercial arena. Iyer’s still unreleased films are ‘Kudure Motte’ and ‘Wall Poster’. Iyer was responsible for formulating a film cooperative that made ‘Ranadheera Kanteerava’.

After acquiring the ‘Acharya’ position in 1975 Iyer thoughts, style of living turned divine. He made remarkable masterpieces like ‘Adi Shankara’ (1984), the first Sanskrit film. The pains he took to make this film in the Himalayan terrain at his old age and the cinematic skill he has used to give expression to Shankara’s philosophy is legendary.  In Kannada he made ‘Sri Madhwacharya’ in 1986 and ‘Sri Ramanujacharya’ in 1988 in Tamil. All of them received national recognition. He is the only one in the country who had profound knowledge on the Adwaitha, Dwaitha and Vishistadwaitha philosophy.

With one after another challenging tasks Iyer never satisfied his hunger for making films. In Hindi and English he made ‘Swami Vivekananda’ that was produced by Subbarami Reddy. Victor Banerji and Mithun Chakravarthy figured in key roles of Vivekananda and Sri Paramahamsa respectively.

Till his last breath he thought of cinema, breathed cinema and slept thinking on cinema. For Iyer the quest for making innovative films was never ending. Highly short tempered Iyer always used to say that ‘I don’t do either cinema or television serials for masses and I don’t need their reaction. I do my work for my satisfaction and for others.

Iyer’s recent works include the long cherished project of ‘Natyarani Shanthale’. What was thought as film in 1982 was completed as 26 episodes as commissioned TV serial for national network. ‘Sri Krishnaleele’ in Hindi, Malayalam and Kannada – the ‘Leelas’ as seen by Sri Purandaradasa has also been completed. Another project ‘Sampoorna Ramayana’ – comparing Sri Ramayana to that of human body Iyer had done deep study on this. But fortunately before seeing the light of this film he has left this world.

For the departed soul of G.V.Iyer, the eccentric genius Chitraloka team makes a final salute.