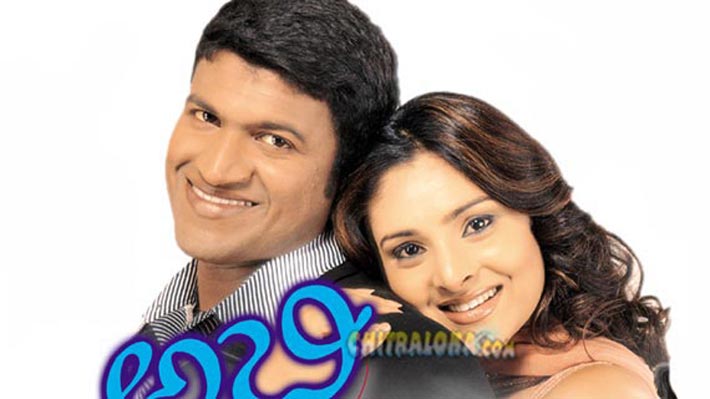 However two straight films ‘Abhi’ and ‘Chandra Chakori’ and two remake movies ‘Kutumba’ and ‘Raktha Kanneeru’ are the super hit films in the year 2003. With two hits and just released ‘Gokarna’ Upendra is undoubtedly the ‘Star’ of the year. Puneeth Rajkumar with just one release ‘Abhi’ is the ‘powerful star’ (this is the crown he has got this year) of the year. While Darshan Togudeepa gives a stunning second year as hero he is the safe bet for the producers. Kariya, Laali Haadu, Lankesh Patrike, Namma Preethiya Ramu, Daasa and Annavru have turned out to be toppers at cash registers. In the debut the striking performance was seen from Murali in ‘Chandra Chakori’ and Mayoor in ‘Mani’.

The list of other hero’s goes like this – Vishnuvardhan played the role of ‘Wall’- two of his films ‘Raja Narasimha’ and ‘Hrudayavantha’ did average business. It is a bad year for Shivrajkumar. He had five releases two are good in box office. Sudeep’s Kichcha, Partha are average and he has ‘Swathi Muthu’ just released. Jaggesh 3, Vijaya Raghavendra 4, S.Narayan 2, Ramesh 2, Patil 2, Naveen Mayoor 3, Shivadwaj 4, Om Prakash Rao, Sara Govindu 1 (became heroes this year) 2, Mohan 2, Saikumar 4, Ananthnag 6, Yogishwar 2, Rajendra 2, Devraj 9, Ravichandran 1, Shivaramu 1 are the other prominent stars had below average success.

Among the heroines it is the year of Ramya – She has figured in Abhi and Excuse me. She walks away with honors.  Rakshita figured in two and the result of ‘Gokarna’ is yet to come. It was a disastrous year for Prema and Radhika. Ruthika figured in five but not able to sail in a strong role. Anu Krishnakumar was just average with five films in the year. Bhavana had three releases and she bagged the state award for ‘Kshama’.

In the music department it is the most convincing performance year for Gurukiran. He was able to undergo the onslaught of 11 new comers including R.P.Patnayak of ‘Excuse Me’. Gurukiran’s Kariya, Sachchi, Kutumba, Panchali, Abhi, Khushi, Partha and Gokarna are pretty good in the audio sales too. Hamsalekha scored music for 14 films but could not make it big. Manohar 6, Rajesh Ramanathan 10, Babji Sandeep 2, Krupakar 2, Venkat and Narayan 2, Ilayaraja 1 are in below average slot. Layendra, Prayog, Srishaila, Suresh Devkumar, Venkatesh, Venkat and Narayan, Raja, Deepak and Patnayak are the other new comers.

In the camera wing it is Seenu all the way for his brilliant handling in Kariya and Excuse me films.  Others in the camera department are - Anaji Nagaraj 6, P.K.H.Das 4, Suvarna 4, Krishnakumar 4, R.Giri 3, Janardhan Babu, Mathew Rajan, Mllikarjun 2.

• I would have become a ‘Sanyasi’ if not an actress says veteran B.Sarojadevi.

• B.C.Patil opened an editing center at his home office.

• Deveeri film was selected to festival of transparency films.

• A month long Cine Expo to raise funds for KFCC building was held at Bangalore palace.

• Darshan at Kiriyara Kate Kate, Shruthi is the judge.

• HD Camera introduced for the first time in ‘Magic Ajji’.

• Love under production Kannada film comes into a tie up with Air Tel company.

• Dr.Kambara asked for remuneration for his song for every telecast of episode of Moodala Mane. The story of the TV serial was also in controversy as Rekha Kakandaki claimed it is her story.

• Vedike by H.D.Kumaraswamy – a break up faction of producers was formed.

• B.C.Patil and Vijayadashami controversy. It is still continuing.

• Dr.Rajkumar banner was scolded by producer H.D.Kumaraswamy. Shvirajkumar gives back.

• B.C. Patil was arrested in Hirekerur.

• Durga Shetty cries at media meet for break of her marriage with actor Dharma.

• The mega portal on Kannada cinema CHITRALOKA has some rejoicing moment. This popular website has been awarded the ‘Golden Web Awards’ given by the International Association of Web Master and Designers (IAWMD) for 2003-2004.

• Vatika man of the year in association with ETV bestowed on Dr.Rajkumar.

• Few days before closing of this year we lost Veteran Kannada film actor Gangadhar (67) died of kidney failure and sugar. Dr.K.S.Narasimhaswamy popularly known as KSN – the Mysoora Mallige Kavi, the genius in literary circle for his poems in six decades of writing died

• In a major road accident near Davanagere TV star K.P.Nanjundi escaped with major injuries. Three persons traveling with him were – cine journalist Manohar Tholahunase, voice over artist Mahalakshmi and