The high court of Karnataka stayed the giving away of the State Film Award 2010-11 on Tuesday. Justice Abdul Nazeer recalled his earlier order issued in May and ordered that, the State cannot go ahead with the process of giving away the awards. In April, the court had ordered that it cannot give an interim stay but said the award would be subject to the final outcome of the case. Now the State cannot even give away the awards.

The first petition filed by Priya Hasan said her film Bindas Hudugi deserved an award while challenging a special jury award to Ayesha for her stunts alone though she was from another state and did not dub her own voice. Another petition by Basant Kumar Patil demanded that as the winner of highest number of national awards, his film Bettada Jeeva based on Shivarama Karanth 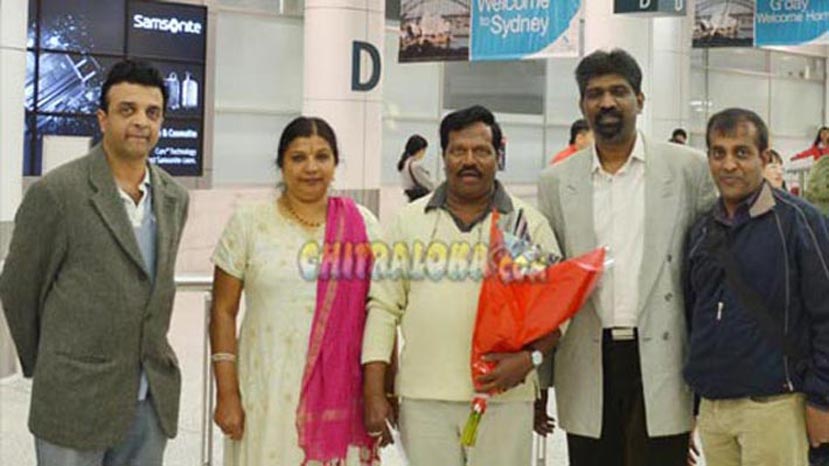 A rare photo of Ambi and his friends 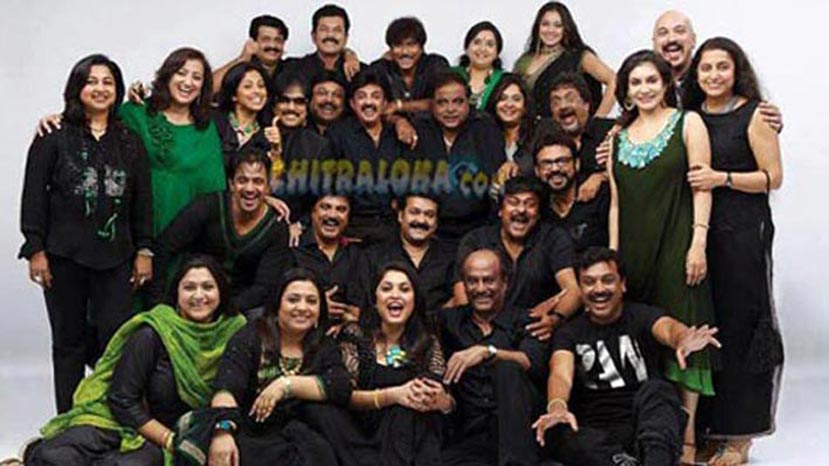 Super Star Rajnikanth, Mega Star Chiranjeevi, Victory Venkatesh, Malayalam Super Star Mohan Lal, Arjun Sarja, Sharath Kumar  Sivaji Prabhu, Suresh aong with Ramya Krishna, Ambika, Suhasini, Kushobb, Lizzy Priyadarshan, Sumalatha Ambareesh, Radhika Sharat Kumar and many other actresses who almost made it to the film industry during sevenites and eighties.  Along with our own Rebel Star Ambareesh.  Only three other legends are missing.  Dr. Vishnuvardhan, Balakrishna  and Mammotty.  And of course Dr. Bharathi Vishnuvardhan. , The photograph was taken an year ago when Suhasini, Lizzy, Radhika had organised a meet in Chennai for a Nostalgic get together of all the artists who were great friends in the eighties.    It all started three years ago when Dr. Vishnuvardhan and Bharathi also made it to the get together party along with Ambareesh and Sumalatha.  But after Vishnu sir''s death, Bharathi is missing out of the get together meets.

Please see this photo and exuberance shown by the leading ladies of  Ambi and other great stars.

Ambi, you are really a great jewel in the Kannada film industry who is popular in other regional and bollywood industries as well.

Adhdhuri Gets a Bumper Opening 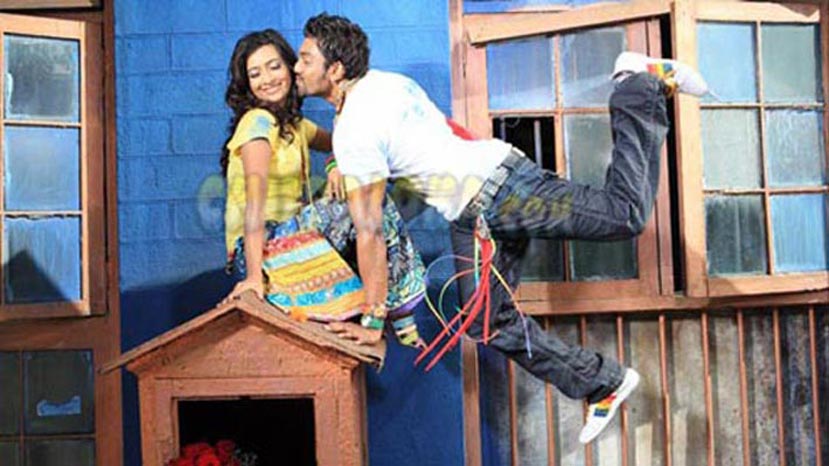 Young creative director A.P. Arjun's second directorial venture "Adhdhuri' has taken one of the biggest openings for any medium budget films in recent times. The opening is much better than the much hyped films like "Pyaar Ke Aagbittaithe" which has turned out to be a mega hit and  Janoo directed by Preetham Gubbi and produced by Jayanna.   The trade did expect some sort of a good opening for the film because of the curiosity value created by the entire team of Adhdhuri and the fabulous success of the audio in the market.  But the huge opening has really beaten the trade expectations.

Experienced distributor Basha who has obtained the distribution rights of the film by paying a big advance is overwhelmed with this extra ordinary opening.  "This is an unprecedented response.  I never expected such a huge opening for a film featuring a new comer and from a director who was just making his second film.  It looks like the audience have connected very well with this youthful film.

The collections of theatres which did not report housefuls in interiors have shown tremendous improvements in the matinee and evening shows.  This film looks like turning to be a blockbuster' says an enthusiastic Basha.

But there are causes of worry too. The delayed Monsoon is going to strike within three to four days from now.   Continuous rain fall may affect collections in Malnad areas very sharply as well as in other areas which are curcial for good revenue generation like Mysore distribution area, Chitradurga -Bellary-Davanagere and even North Karnataka regions where rain fall may keep people indoors in cities or in agricultural fields in the B centres.

Basha says that he has released the film in over 116 theatres all over the state and he has not heard a single negative report emanating from these theatres.  'What I am getting is a tremendous feed back which is really heartening.  I hope with such a fantastic  report, the film's collections will be steady even in the event of rains' adds Basha.

K.C.N.Mohan who has released the film in his Navrang theatre says despite releasing in a  large number of theatres in Bengaluru, the film has taken a  stunning opening for any film with a new hero.  "We recorded 1.20 lacs collections on day one which is a  much better revenue accrual than films of some well known heroes in the industry' says Mohan.

Not only in a cosmopolitan city like Bengaluru or  very good Kannada film commercial  centres like Mysore and Mandya,  the much delayed film Adhdhuri has attracted good crowds even in smaller centres like Kollegal in Mysore, Shikaripura and Sagar in Shimoga district, Kadur in Chickmagalur district, Ramnagar in Bengaluru Rural and Hiriyur in Chitradurga districts.

Besides Sagar and Prasanna which recorded full houses for all the four shows, the collections have been hugely satisfying in other centres.  The collections in INOX multiplexes are very good while the other multiplexes have also recorded good revenues from ticket sales.

Davanagere, Chitradurra and Shimoga have recorded very good collections and the first days collections have always covered weekly rents of the theatres in these centres.  Adhdhuri has another advantage because  the well maintained Lakshmi theatre in Shimoga charges lesser rent than the other theatres in the city.

In Hubli though none of the shows recorded housefuls, the collections have reached maximum levels.  "The film has obtained very good report from people who have watched the film.  I am sure in the coming days, the good opening will transform in the form of increased collections in the entire Northern Karnataka belt' says an experienced distributor.

Trade Analysts also feel that the film's good opening clearly proves that  Kannada film audience will always receive honest projects which are well presented even if it has a new hero.  Some analysts say that director Arjun and the film's heroine  Radhika Pandit have good following among the younger audience.   "The film can move towards block buster category in the coming days, if  the family audience who have a special liking for Radhika Pandit visit the theatres in large numbers' says another analyst.

Anna Bond on May 1 - Exclsuive 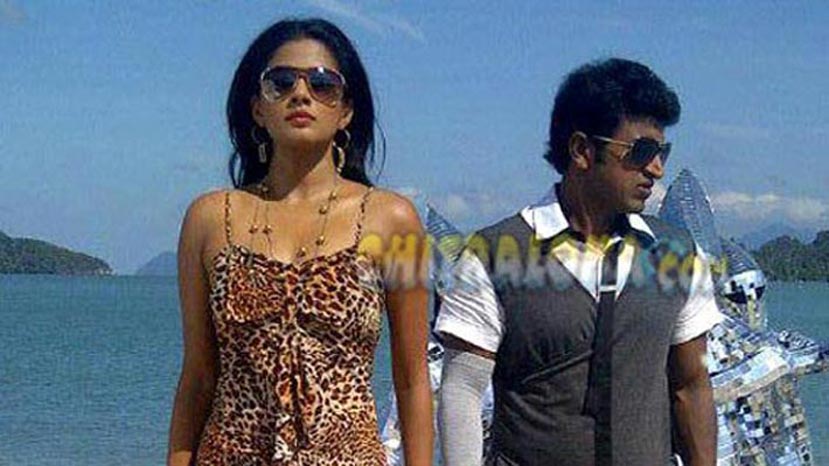 This should clear all the confusions so far about the release of the film. The film is sure to get an earth shattering opening now as it is releasing on a Holiday.   The first day collections are sure to create fresh records and the expectations in trade are that  first six day collection records would be something that would be too difficult to be matched, as there will be three Holidays in the six days. Even otherwise the film would have been expected to make a big splash in the Box office.

Puneet has once again confirmed  that Anna Bond has nothing to do with the Bond films and he is not playing the role of  Bond, but just a fun loving  entertaining person who loves to dabble in action and also in love.

With Anna Bond releasing on May 1, it would not be a competition if Upendra starrer film Kataari Veera Sura Sundaraangi would hit the screens on May 4  or a little later.

It may be recalled here that Vajreshwari Combines has presented most of films on either Thursday or Friday, but have also released some of their films on different days.   Nanjundi Kalyana, the biggest block buster of the Dr. Raj Kumar's production house was released on Wednesday and the film went on to become the biggest hit in the career of its hero Raghavendra Raj Kumar and also the biggest hit for Vajreshwari Combines distribution office till date.   Though Shankar Guru  was released on a Friday in 1978 to become a major hit , the next production of  Dr. Raj Kumar's home production Thaayige Thakka Maga was released on a Wednesday.  Now, Anna Bond is getting released on Tuesday, mainly because the release day matches the World Labourer's day.   Sources also say Tuesday has always been lucky for Power Star Puneet Raj Kumar who takes his major professional and business decisions on Thursday and even hears stories of his films on Tuesday.