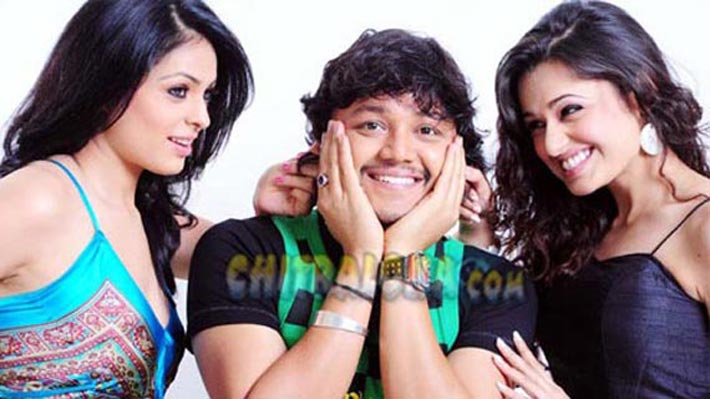 Ever The shooting of Maleyalli Jotheyalli produced under the banner of Golden Films by Shilpa Ganesh has completed its shooting in Mysore. Besides Ganesh and the two heroines of the film, many sequences featuring Rangayana Raghu and Sudharani were shot for the film. Sudharani is playing a special role in the film.

'The shooting of the film held in Sakleshpur and Mysore has passed off well without any problems. Every thing has happened according to our planning' says Ganesh. He thanked the entire team for doing a very good job throughout the shooting of talkie portions of the film.

“Every thing was planned perfectly. We chose to shoot at a time when rains are scheduled to hit interior villages of Sakelshpur. We had to move out with out expensive equipments when rains were pouring and dark clouds were hovering around the skies. And always generator vans were filled with diesel for getting artificial rains from tankers. Suddenly the rains would stop and in such circumstances we can not wait for rains to continue further shootings. We had taken filled water tankers also which moved in the most inaccessible and wet roads. Skidding of Vehicles became a normal routine and many of us even sustained minor injuries. But I should thank the whole team of workers, artists, technicians who worked day and night to complete the schedule. Every one of us including the two Mumbai based heroines Anjana Sukhani and Yuvika Choudhary were charged on the sets. We even celebrated Yuvika’s birthday on the sets of this film. Coincidentally we had to shoot the birthday sequences of Yuvika’s character in the film on the same day’ says Ganesh.

Ganesh also spoke highly of his wife Ms. Shilpa who had taken charge of the entire production designing of the film. “She has been a big support to me. And the enthusiasm she shows is really baffling. She even brought my daughter Charithra to Sakleshpur and Mysore where we were shooting' says Ganesh.

Ganesh said that he was very happy that director Preetham Gubbi and cameraman Krishna formed a good team and were improvising each and every sequence of the film. We are planning to go for the song sequences of the film from August third week, says Ganesh.

Talking about his first Best Actor Filmfare award for the film Galipata, the actor said that the award belongs to the whole team. “Yes, this award has been important to me also because I was expecting for almost three years for my other films as well. This year I really did not expect that much because I knew there was lot of good competition. This award has come just at a time when my wife Shilpa gave birth to a child and has taken over the mantles of production’ he says Jokingly.

Priyamani Wish To Dub In Kannada 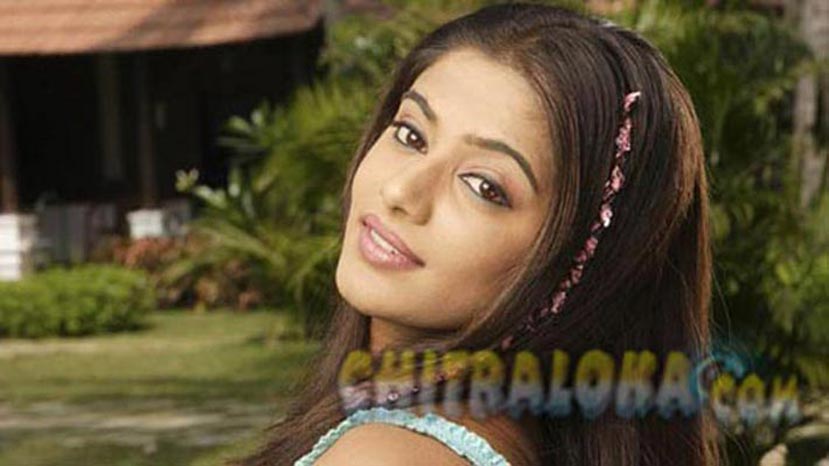 Priyamani who could not dub for her first Kannada film Raam has decided to dub for her next Kannada film come what may. "I can speak Kannada so well being brought up here. Even now I stay in Banashankari which is the hub of Kannada speaking people. I always conversed in Kannada during my Kannada film shoot . But in the case of Raam, I could not dub because the director and producer of the film told me that that character that I was portraying in the film needed a different type of voice than my own. That is why I agreed' says Priyamani.

After losing a Kerala state government Best actress award for her performance in Malayalam film Tirakatha by a whisker, Priyaman has decided to dub her voice in films of all languages.

Though Priyamani was born in Palakkad of Kerala and she is able to speak Malayalam fluently, her voice was not used in this film directed by Ranjith. Finally the state jury decided not to consider Priyamani for the award since she had not dubbed for the film and the Best Actress state award went to another actress Priyanka. 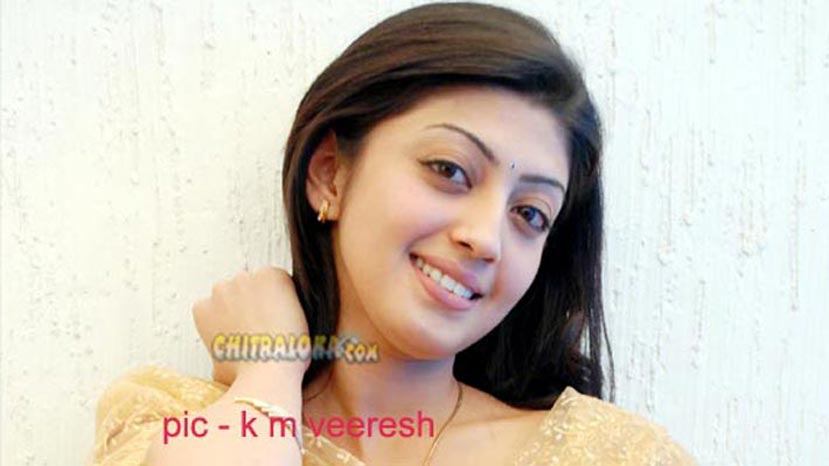 The shooting of Darshan’s film Porki produced by Dattu and directed by M.D. Sridhar is now going in Bangalore. Bangalore based girl Praneetha has been chosen to play the lead in the film with Darshan who is doing the title role. The film is a remake of Telugu Hit Pokiri directed by Puri Jagannath. For Praneetha who can speak Kannada very fluently this film is the biggest break in her career.

Praneetha is still come to terms with this huge development and has been excited with this prospect which she had never dreamt off.

“Even when the talks were going on, I did not believe that I would be part of this huge film. Porki is not an ordinary Kannada film. It is a remake of the Telugu film industry’s biggest block buster Pokiri which rewrote the history of Box office. I was still in the state of shock even while I wore the make up and faced the camera on day one. I was told by the film’s producer and director not to reveal anything to the media till I was advised to do so. I have been getting many calls from the media, but I have only answered their questions and has not revealed anything on my own’ says Praneetha.

Praneetha should have been introduced much earlier in films by director Indrajith, but the project did not take off. She was to have teamed up with Ganesh. She was zeroed on for the film Bisile to be paired with Diganth, but then suddenly actress Jennifer replaced her. Praneetha had also rejected some offers like Preethi Nee Shashwatha in Kannada and a Telugu film.

“Having worked in some modeling assignments for the Print Ads and Jewellery Ads for T V commercials, I have developed the knack of selecting very good costumes and other paraphernalia for any type of photo shoots’ says Praneetha who was one of choices for Yogaraj Bhat’s aborted film Lagori in which Puneet Raj Kumar should have played the lead.

“I don’t have regrets for the earlier disappoints. Right now, I am enjoying a big party time even as I am preparing for the final schedule of Porki. Two songs of the film will be shot in abroad’ says Praneetha. 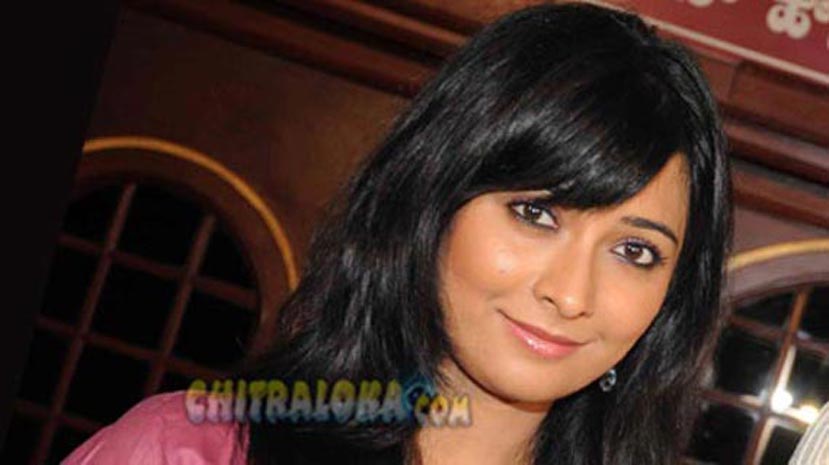 Talented actress Radhika Pandit is on cloud nine. She has received the Best Actress award for her performance in the film Moggina Manasu on last Friday at the Idea Filmfare awards function held at Hyderabad. "It was a great moment in my film career. I just could not believe it when my name was called . I dont know what had happened to me till I received the award and came back smiling all the way to be with my mother' says Radhika Pandit.

"It is a fact that my responsibility has increased with my award. I think I have to thank Mr. E. Krishnappa for deciding to cast all artists who speak in the Kannada language in the film. And I should also thank Mr. Shashank for giving me the role of my life time. He wrote an amazing script for this film' says Radhika Pandit in conversation with Chitraloka Mega Portal. . Very nice things are happening in the career of Radhika. Recently she had been on a thanks giving tour to several districts with the Love Guru team which included the film's hero Tarun and director Prashanth. Radhika was overwhelmed with the appreciation she had received from the media and the audience. 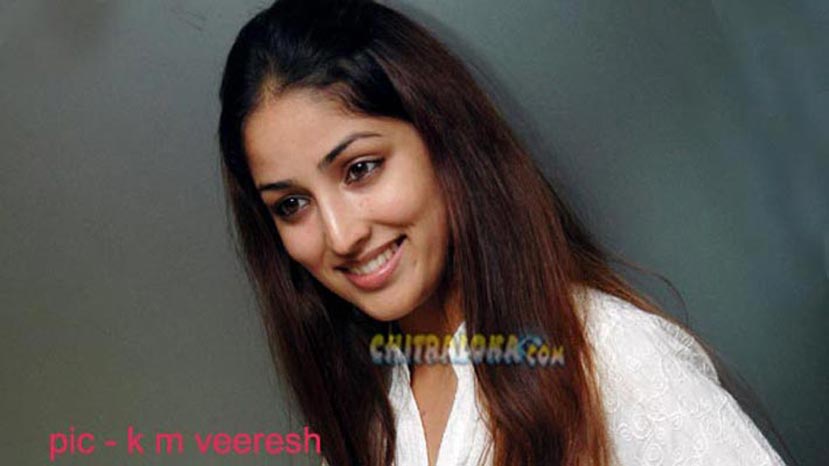 Yaami Gautham the heroine of Ganesh starrer Ullasa Uthsaaha is quite confident about the film. She has been quite thrilled with her own debut performance. Ullas Uthsaaha has been her first film debut. Yaami wanted to complete her IAS exams, but destiny took her to Mumbai where she did her modeling and also worked for Television serials.

She is Yami Gautham who has been lucky enough to be the heroine of Golden Star Ganesh in the film llasa Uthsaaha for which shooting is now busy progressing in Mysore.

“I enjoyed this phase of being a heroine of a top star like Ganesh in this big budget Kannada film. I take life as it comes. I did not expect to star in a historical tele serial which got me a good name. Likewise my entry into films was also unexpected’ says Yami Gautham whose father Mukesh Gautham is an executive producer for Zee Punjabi and Zee News.

Yami who is still perusing her studies in Law in Mumbai sys that shooting for the Kannada film has been a joyful experience for her. “More than anything else the whole team treats me well and think I am the member of a big family. I am sure that this film which has a good story line will click in a big way’ says  Yaami Gautham.

"I am learning something new every day when I am working with such experienced artists and technicians in Ullasa Uthssaha. I am really happy to be part of a big film where I have the opportunity to work with some big names in the Kannada film industry ' says Yaami.