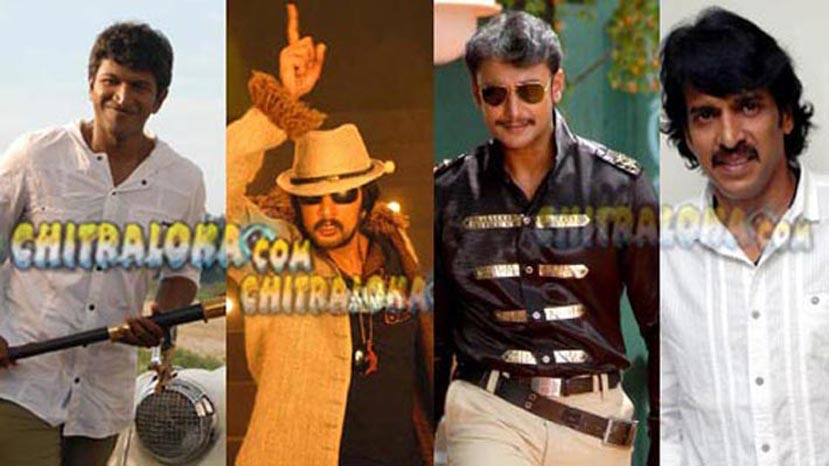 Hitherto the Telugu films were dubbed into Tamil and many dubbed films like the much hyped  Magadheera and Arundathi did fantastic business. But in recent days the dubbed Taml versions of Telugu films have not done any noticeable business.  However the Telugu dubbed versions of good quality Tamil films have done well despite boasting of a not so big star cast.

Telugu film director S.S.Rajamouli's latest venture is made in two separate languages Telugu and Tamil.   In Telugu version it is named as Eega and in the Tamil it is titled as Naan Ee.    Naan Ee is not dubbed movie but shot in Tamil along with Telugu. So Rajamouli is releasing the movie in Tamilnadu in big way with the help of PVP Cinema  that has  bagged the distribution rights of  the Tamil version. Kicha Sudeepa is playing a very important role in this film and his performance in this film has already been spoken about in the

Telugu film industry.  Sudeep has been appreciated by Rajamouli many times in his twitter page.

The not so popular  Tamil  film heroes like Jeeva, Vishal and Karthick have also established their base in Andhra Pradesh through the dubbed versions of their films.  Already charsimatic super stars  like Rajnikanth, Kamal Hassan, Surya,  Vijay, Ajith and Surya have developed their own market for the dubbed films.

This has enabled the Tamil films to increase their market share in the Andra Pradesh also.  Indirectly this additional revenue earnings have made the producers of the Tamil film industry to expand the budgets for their films.

This new experiment has made   Telugu heroes to  realize that they have to expand their fan base and concentrate on building the markets in the neighbouring state of Tamil Nadu.  Already Telugu films are released simultaneously in  the Karnataka state and over the years have increased their business potentiality in the state.  Telugu stars like Allu Arjun have enjoyed huge popularity in Kerala where films like Arya, Arya 2 and Badrinath have done good business.

Looking at these developments, it looks that Kannada film producers and the  big Kannada super  stars have not made any serious attempts to increase the market share of  Kannada films in the neighboring states of  Andhra Pradesh, Tamil Nadu and Kerala where dubbing films are allowed to be released and have a satisfactory screening opportunities.  Both A.P. and T.N. have a large theatre base which needs more number of  films to be screened, particularly in the semi urban and rural areas.

It is  high time that the Kannada Super Stars like Puneet, Darshan, Sudeep, Upendra, Shivaraj Kumar and Vijay try to expand their fan base in the neighbouring states and concentrate on building a market in Tamilnadu and Andhra Pradesh where there is a significantly large number of theatres which provide  a big  screening opportunities. This would enable good quality Kannada films with much lesser charismatic artists and talented directors to release the dubbed versions in the respective states.  It is known very well that directors like Yogaraj Bhat are quite popular in Andhra Pradesh also.

Thankfully artists like Upendra and Sudeep can make a good beginning as both of them are known to the Telugu and Tamil  film audience. Upendra's Telugu dubbed version Super has done satisfactory business. Telugu dubbed versions  Sudeep's big films like Vishnuvardhana and Kempe Gowda have not been released yet, but the producers of these films may well try to release their films in a few days. .   But I understand that producer Dwarakish is hoping to get a bigger pie from selling the remake rights than its dubbing rights. Kannada Super Stars like  Puneeth,  and Darshan are certainly better in executing the action and song sequences in their films than many number of  Telugu heroes who are ruling the film industry. Duniya Vijay is already established as one of the best action heroes in the Kannada film industry.   It would be good to see films like Anna Bond and Sarathee getting dubbed into Telugu to provide an opportunity for film fans in neighbouring states of Andhra Pradesh and Tamil Nadu to see in the near by theatres. Anna Bond directed by Soori has a better chance to get noticed because of  the presence of artists like Priyamani,  Jackie Shroff and John Kokaine who are already well known in Telugu and Tamil film industries.

Another important factor that may go well for the big budgeted Kannada films is that many number of Kannadigas who are residing in these two states may also like to see atleast the dubbed versions of the most successful Kannada films featuring the Kannada super stars.   .

Now, I understand producers of  some big budgeted Kannada movies are trying to focus n the markets of  Andhra Pradesh and Tamil Nadu. Already producer Munirathna is releasing the  Telugu dubbing rights of  his recent film Kataari Veera Sura Sundaraangi starring Upendra and Ramya in the neighbouring states of  Andhra Pradesh and Tamil Nadu. Both Uppi and Ramya (known as Divya Spandana for Telugu and Tamil fans) are known in the two neighbouring states.  Another producer Uday Mehta is also focusing on the release of the dubbed versions of his new film "Bachchan' starring Sudeep and directed by Shashank in the two neighbouring states.  Uday Mehta is now finding a suitable heroine  who has already acted in Tamil and Telugu films and is quite well known in all the neighbouring states.  Producers of  Darshan starrer

"Viraat' are already well known in the Telugu film industry as they have produced many original Kannada films and also dubbed versions in Andhra Pradesh.  Now, the producers of Viraat are trying to release the Telugu  dubbed  version of Viraat in the state of Andhra Pradesh.

Many Kannada film producers have always been thinking on negative lines about trying to focus on making and releasing dubbing big Kannada films in the neighbouring states.  Yes, Kannada films might not have  tasted a high degree of  success in the recent past,  but what is preventing them from making revived efforts to  seriously focus on the Andhra Pradesh and Tamil Nadu markets.  In this world, Success does not come instantly to any marketing strategy, but persistent planning and publicity is sure to bring in desired results.

If our Super Stars, film  directors and producers seriously want some revenue from the neighbouring states, we need to promote our films aggressively.  It needs lot of planning and lot of concentration in identifying the  best of the theatres in major centres for releasing the dubbed films. Uploading the trailers and songs  of dubbed versions in popular websites like  youtube and other popular websites,  proper publicity in the television channels is sure to create some interest in the dubbed films.      Kannada film producers should not use this experiment just as a publicity exercise to garner a little more revenue for the film  in the state, but try to get maximum benefits from this new experiment. .

It will be better for the big Kannada film stars to make  co-ordinated efforts to  try every available market strategy to  get positive results which enable the producers to get additional market revenue they have been craving for.