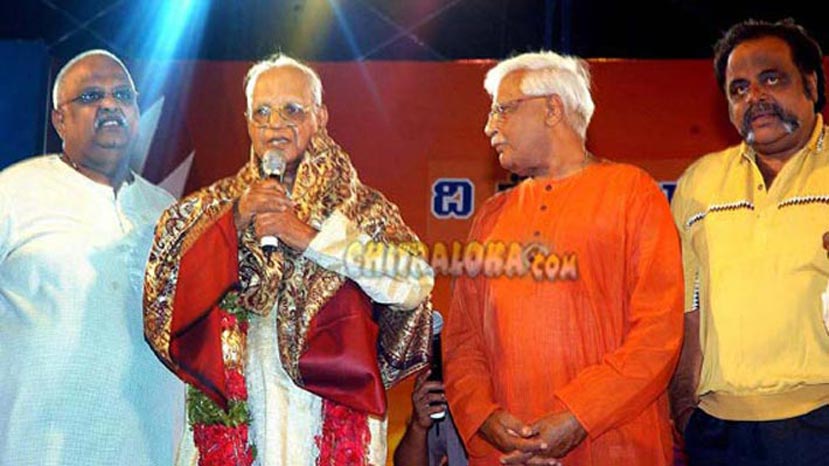 Now the ‘Kannadave Sathya’ Kannada light music program headed by C.Ashwath has become a mega hit, it is the time to find the reasons for the stupendous success of it. As a matter of fact no one knows the real reason for the success. But the analysis has something colorful to describe.

First of all the title of ‘Kannadave Sathya’ has drawn so much of crowd. Thanks to Srinivasa G.Kappanna for suggesting the title. The admiration has come right from the bottom of the heart of Kannadigas when this title was announced by Global Consultants.

Secondly the publicity from the print media and ETV promos plus the 100 plus hoardings reached the masses.

FREE ENTRANCE – Despite of busy schedule the people of Bangalore and from some other parts of Karnataka came to Bangalore Palace grounds since the entry was free and it was a week end.

C.Ashwath has that magical pull. His excellent voice is no doubt a big element that has made the function mega hit.

The Palace ground that normally accommodate Stings, Adams etc the western musicians, this time for Kannada musical program the curiosity built up. As promised by C. Ashwath the lavish scale was very attractive.

The rain not affecting the program was another big advantage. The cool breeze and good environment added extra dimension for the music lovers.

Just look at the passes distributed all over Bangalore. Against five passes one (two entries for one pass) was the expectation. That’s the reason why around 20000 seating arrangements were made. But the ratio calculation of the Global Consultants reversed. For five passes nearly four turned that is the reason for multiplication in the turn out. As against 20000 nearly 60000 assembled to get the feat from C. Ashwath.

The Police was surprised and shocked with the turn out.

For most of the people it is not only ‘Kannadave Sathya’ but also ‘Kannadave Nithya’.