Reasons For Govt. Not Increasing Subsidy to 100 - Exclusive Karnataka Chief Minister Jagadish Shettar who is also in charge of the finance portfolio presented his maiden budget which had concessions galore for all the sectors of  the industry. Even the common man has been benefited out of Shettar's largesse in the budget.  But the Kannada film industry which had earlier presented a memorandum to the Chief Minister Shettar with a few demands is unhappy that none of its demands have been met in this budget.

The main demand pertains to the grant of subsidy to 100 films of Kannada, Kodava, Thulu, Konkani languages from the present level of 75 films   Already films which had obtained National and State awards would gain automatic entry to the list of subsidy and since the production activities are in full swing, it was expected a minimum of 110 to 120 films will be released every year.

Even during the inauguration of Dasara festival, Jagadish Shettar had promised to increase the number of films eligible for subsidy from 75 to 100.  But there was no mention about the subsidy issue in the budget.

Why this turnaround by the Government headed by Shettar is really surprising the film personalities.

Shivaram pointed out in his letter these points. 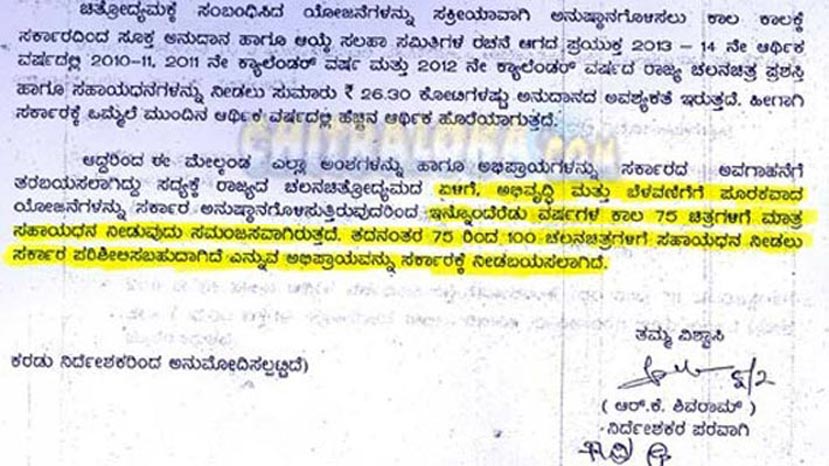 1) By enhancing the number of films eligible for subsidy to 100, there will be a situation wherein all the films produced in the year will automatically get subsidy. Then the Government's avowed policy of encouraging quality films will get a beating as all there will be a number of films gaining subsidy which are not quality conscious and which do not represent the ethos of  Kannada and culture.

2) For two years, the idea of enhancing the number of films may be kept in cold storage because in the present situation Kannada films are produced in the range o 100 to 110.

3) If the number of films eligible for subsidy is enhanced, then the state government which is already reeling under severe draught conditions and consequent economic strains have to bear an additional burden of Rs. 2.5 crores which may not be a feasible proposition.

4)  The subsidy to well made historical and period films and children films have been increased, to Rs. 25 lacs which may inspire producers to make good films. But at the same time  the exchequer has to bear the costs of increased subsidy.

How the KFCC and Kannada film producers association is going to deal with the present situation in the context of the opinion of Information Department's views on the subject is to be seen.