Chitraloka Impact - BMS Will Not Have a Free Run at BIFFes 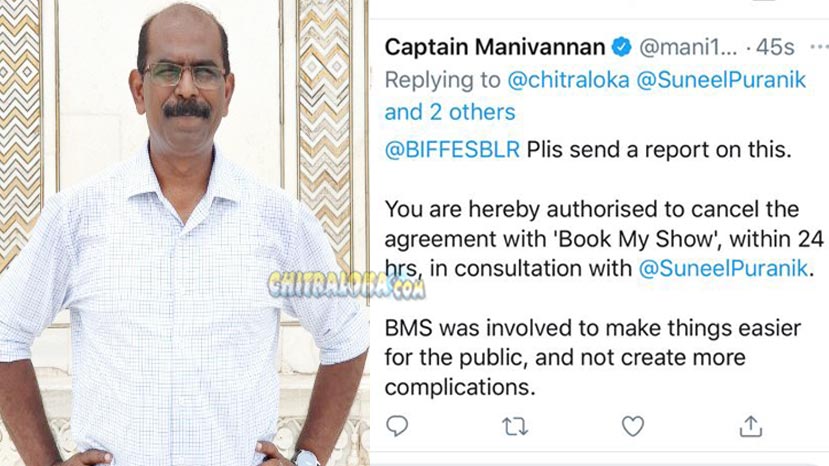 After Chitraloka.com broke the news about how Book My Show has been given control over the entire ticketing and delegate passes for the 12th Bengaluru International Film Festival, there is action on the ground.

Captain Manivannan, Secretary of the Information and Public Relations Department swung into action immediately and authorised BIFFes to even cancel the agreement with BMS. His instruction read, "@BIFFESBLR Plis send a report on this.

You are hereby authorised to cancel the agreement with 'Book My Show', within 24 hrs, in consultation with @SuneelPuranik.

BMS was involved to make things easier for the public, and not create more complications."

Soon after this Suneel Puranik the chairperson of the Karnataka Chalanachitra Academy made a series of statements trying to set things right. He held a meeting immediately and also spoke to KFCC representatives. KFCC members had difficulty in getting regiatered for the festival. Puranik said that a help desk has been created at the KCA for them.

There will be no cash sale of passes. "With respect to cash sales, committee had taken a decision to avoid cash management & the same was communicated to @bookmyshow.To this effect, all paid registrations are only through online.

1. Data collection system has been set up at Karnataka Chalanachitra Academy, we are taking both physical forms and soft copy of the forms to process accreditation. 2. Media related issues are handled by agency.

Committee has adopted this in the interest of making the film festival digital in years to come. As first phase, public registrations have been made digital," Puranik announced.