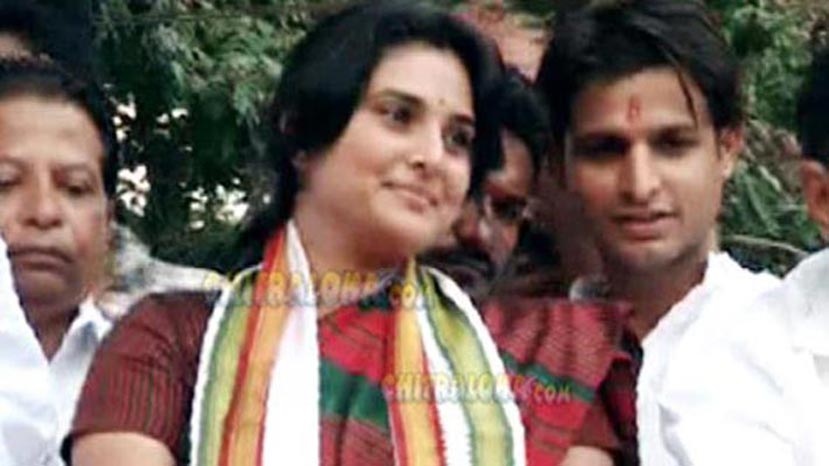 Actress Ramya has found herself in a controversy over making a speech in Tamil and holding a press meet in English. It would have been normal in other times, but both these incidents, that happened on Wednesday is related to the ensuing elections to the Karnataka Assembly. It is well-known that people are sensitive to the language issue and candidates and campaigners have to be careful.

In the meet-the press interaction at The Press Club, Ramya spoke in English and few Kannada words! This left many upset but since she was comfortable in English nothing much was made out of it. But another incident the same day added fuel to the fire. At an election road-show for the Congress candidate in Shantinagar, she spoke in Tamil. The damage was done.

Actors from other states come and campaign in Karnataka and since they do not know the local language, speak in their mother tongue. For example Telugu star Chiranjeevi who campaigned for Congress spoke in Telugu. But Ramya is a known Kannada actress though she has acted in Tamil and did her schooling in Ooty. Moreover the campaigning was in Bangalore, where the language is a sensitive issue. Even AIADMK candidates in Bangalore speak in Kannada in the open. So when Ramya spoke in Tamil, all hell broke loose.

Kannada Abhivrudhikara Chairperson Mukyamantri Chandru, who is an actor himself, threatened that if she did not mend her ways, her films may have to be banned. Karnataka Rakshana Vedike chief, Narayana Gowda went a step further and said unless she apologised, screening of her films will be stopped.

What turn the issue takes now will have to be seen.