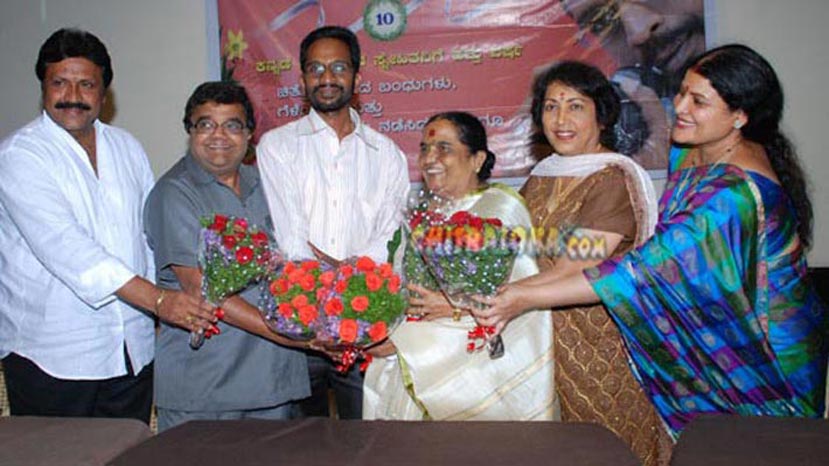 It was a Double Damaka in the Nalvadi Krishnaraja Wodeyar Hall of the Century Club on Wednesday night, when celebrations started for the Tenth year entry of Leading Kannada film portal Chitraloka.com which is often being considered as the mirror of the Kannada film industry

Speaker after Speaker who spoke in the function including Chief guest Ms. Parvathamma Raj Kumar, Ms. Jayamala, Actress and President of the KFCC, Leading actress Jayanthi, Politician and Actor B.C. Patil, Leading film producer and Actor Dwarakish and noted film director Nagathihalli Chandrashekhar reiterated the importance of the Chitraloka web portal in reporting various developments in the Kannada film industry and also open the window of the world to the affairs of the Kannada film industry.

Chitraloka had entered double digit years in its existence which has resulted in its far reaching efforts to promote the Kannada film industry in India and abroad. And it has been a friend of the industry, its actors, technicians, producers and workers. The celebrations went on with big enthusiasm and spirits.

The guests included who and who in the field of Kannada film industry, literature, culture and leading public figures who had participated in this historical function which showcased the tremendous growth of the portal in the past nine years and its ever increasing popularity.

In the beginning, Portal's Chief Editor K.M. Veeresh remembered the initial days of the portal when he was enthused by Parvathamma Raj Kumar and Puneet Raj Kumar to take up the project of starting the web. He said initially the web was uploaded once in a week, but now it is being uploaded with three to four items regularly on day to day basis. He said that one Veteran Journalist was with him for nearly six years, after which another Senior Journalist R.G. Vijayasarathy has been helping him out with contents. He said that the portal has always been trying to ensure quick news to browsers with some interest of the Kannada film industry in his heart. He also said that the portal has been technically upgrading its infrastructure from time to time which has appealed the large section of browsers.

Ms. Parvathamma Raj Kumar appreciated the enterprise of Veeresh in starting the portal and said that his hard work has always been rewarded by God.

Dwarakish said that he understood the importance of Chitraloka when he went abroad to promote his film Aaptha Mithra for the screening in abroad. "To my surprise I found that most of the Kannadigas were well informed about Aaptha Mithra because of the information provided by the Chitraloka portal. I found that most of the American Kannadigas were regular browsers of Chitraloka portal' said Dwarakish.