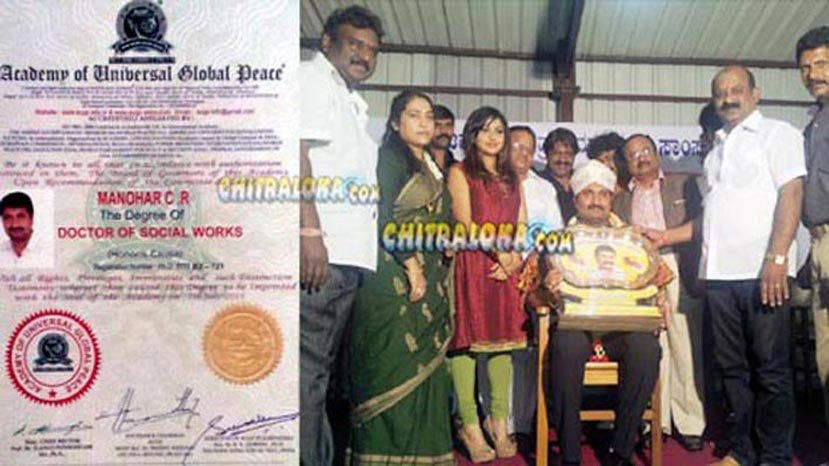 Film producer Dr CR Manohar was felicitated by the Karnataka Film Celebrity Club on Friday evening, to celebrate his achievement of getting a doctorate for the social service from an Academy of Universal Global Peace. The businessman turned film producer is now officially Dr Manohar. Among those present at the felicitation included former KFCC president HD Gangaraju, actress Ramya Barna, producers Umesh Banakar, Ba Ma Harish, Praveen Kumar, A Ganesh, actor Deepak and others.

IAS Officer Dr C Somashekar felicitated Dr Manohar on behalf of the Celebrity Club. Speaking on the occasion, he said that making films was not a necessity for Manohar, but he has taken it up so that he could be of some help to the society. Manohar has enough money and business interests to take up all his time and efforts, but only because he wanted people in the film industry to be benefitted, he was making films. He could have given away money, but that would not be the ideal way and not what people in the industry would prefer. So he is providing jobs making films, Somashekar said.

Umesh Banakar, speaking during the felicitation said that when Manohar made School Master with Vishnuvardhan, he had told the producer that he has made achievements at a very young age and it is not possible for everyone. It was now his responsibility to maintain that unique position. Banakar said that not only has Manohar excelled but with his humility and achievements has become an example for everyone.