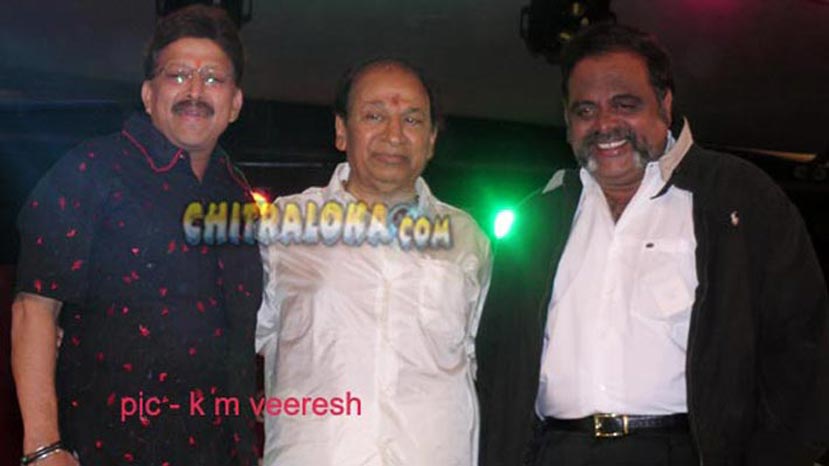 The over all function to honor Dr.Rajkumar is a combination of Karyanga, Shashakanga and Kalaranga (Administration, legislative members and cinema field).

Huge turn out of 70000 people enjoyed the cultural programs but not the speeches.

For the opening song of Jayabharatha Jananiya Thanu Jaathe…. Sung by C.Ashwath and gang the gathering stood up and respected the state song. In this way the government function stamp was seen. This is also the government order that for this song respect has to be given by standing like how we respect the National anthem of the country.

The speech of legislators is obviously not liked. The crowd was not in usual mood when Dharam Singh, Siddaramaiah, Shankaramurthy, Shivaramu took the mike.

When Siddaramaiah the deputy chief minister arrived the ‘Siddu’ film hero Murali was dancing for the song Radheya Seere Kadda….., Deputy CM short name is Siddu. I had been called now because after Dr.Rajkumar speech you will not hear to me. The frank observation of deputy chief minister was appreciated.

Jaggesh asked his voters in Turuvekere to vote for him in the next time. He said he is not in the Assembly. The aspiration of Jaggesh had a nose dive when he sung the song Banigondu Yelle Ellidhe…… This song clearly explains one should not have aspirations…. Aseyamba Bisilugudhere Yeke Yeruve….

When actor Mayur and Radhika came on the stage for the song Le Ye Le Ye Appana Magale….., Jaggesh joined them for the song.

Actor Murali singing for another song Murari……nariya seere kaddha.., coincided with his just started film title ‘Gopi’ that is a remake of Murari Telugu film.

Ashok Basti a native of North Karnataka who looks like Dr.Rajkumar of younger days – was received very well. The dialogues of Babruvahana and Bhakta Prahallada received good applause. Later Ashok Basti came down and met the ministers and legislators in the attire of a king.

Ganga Yamuna Yee Sangama ‘Prema’ was sung on the stage by Manjula Gururaj and Ravi and at this time actress Prema arrived to the function.

The stage was flooded with ministers, legislators, artistes and technicians. It was a houseful stage.

Why? It was filled with all the guests on the stage. It is because the ETV had made arrangements for live telecast of ‘Sarthaka Suvarna’ function from 9 pm to 10 pm. Time pass was done like this.

The Karnataka information minister Shivaramu known for right attitudes came to the media gallery and told the other channels to make it convenient and feel cool. The minister spoke to all the journalists who had gathered at the ‘Sarthaka Suvarna’. This is why we say he is the man with right attitude.

When the turn of superstar Vishnuvardhan came to speak he garlanded Dr.Rajkumar and given one more garland for Dr.Rajkumar to garland his wife Smt.Parvathamma Rajkumar. The photographers wanted to make use of this opportunity. All of them including Ambarish came near the stage for photographs.

When the program after 9 pm was taken over by government official to conduct the show there was lot of tension and confusion. For Ravichandran it was told as Ravikumar, for Ramya it was told as Abhinaya.

SIFCC representative garlanded Dr.Rajkumar on this occasion and spoke to the icon on stage for a few minutes.

The same Mukyamantri Chandru who makes timely and titillating speeches forgot to push his wife inside to the function. How can he neglect his wife and later come on stage and attack the police.

Hundreds of police personnel did not lose control. When the protocol has to be maintained they are in a position to question.

Senior journalist who went out in the middle of the function could come inside without invitation card by properly convincing the police officials.

Mukyamantri Chandru yelling at Bangalore has a population of 68 percent non- Kannadigas and 32 percent Kannadigas was not the right statement felt lot of people.

Mukyamantri Chandru telling the film industry not to quarrel and get divided was also not a necessary remark at this stage.

Top actress Jayanthi gave a peck to the cheeks of Dr.Rajkumar while Parvathamma Rajkumar and Karnataka Chief Minister Dharam Singh looked on. Later in her speech Jayanathi told offering kiss to ‘Nanna Raj’ would not be felt otherwise by Smt.Parvathamma Rajkumar.

Opposition leader Shankaramurthy had no one pertinent point to make in his speech. It was as if he would raise the issue in the Assembly he had been called to speak.

I do not drink, look at other girls and smoke in my life after Dr.Rajkumar advised me when I took up films – Kumar Bangarappa the sitting MLA said in his address.

Dr.Rajkumar is a combination of gold and diamond in his qualities – he is ‘Chintamani’ – Dr.Baraguru Ramachandrappa said.

For hitting back on the government for not allocating time for him to speak Baraguru Ramachandrappa was taken to task by Deputy Chief Minister and Chief Minister one by one in distress.

When a person like Baraguru Ramachandrappa receive a notice to cut short his speech if he feels it is an insult he can easily take other steps. Saying a few words and coming back to his place. After condemning the government attitude then again sitting on the stage is improper. But Baraguru avare neevenu only two minutes thagolilla. You went on what you wanted to say.

The program concluded at 11.15 pm. Traffic jam was as usual in the night too.