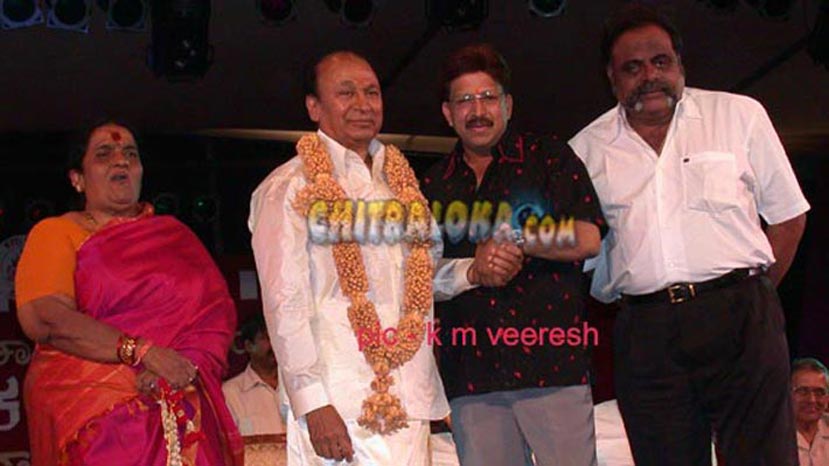 The Karnataka government will not take any step that harms the Kannada language promised the Karnataka chief Minister N.Dharam Singh at the ‘Sarthaka Suvarna’ honor to Dr.Rajkumar for his 50 years of service to Kannada films at Bangalore Palace on Saturday evening. The government would not hurt the feelings of Dr.Rajkumar said the chief minister in his speech after honoring the icon of Kannada cinema. Today is a historic day. Nowhere in the country the government has taken up initiative to honor the great contributor to cinema the chief minister Dharam Singh opined.

At the honor of Dr.Rajkumar with a shawl, garland, silver citation and certificate there was fire works in the air. A number of colorful fireworks and air balloons reaching the sky gave a splendor moment.

Responding to the honor Dr.Rajkumar recited the song Deena Naanu Samastha Lokakke Deva neenu and said what he can give is only love to the ‘Abhimanigalu Devarugalu’ continuous support for so long. I never anticipated this growth. It is because you have seen me in various roles I was able to get food, clothing and above all the ‘love’. Dr.Raj also recalled from when he started telling his fans as ‘Abhimani Devaragalu’ Raj thanked the `kannadavesatya' team for the wonderful arrangements.

The Karnataka deputy chief Minister Siddaramaiah said there is no parallel to Dr.Rajkumar in Karnataka. He should live long and be a torchbearer for the people of Karnataka the deputy CM opined. Honoring Dr.Rajkumar is honoring ourselves he said in his short and sweet address. 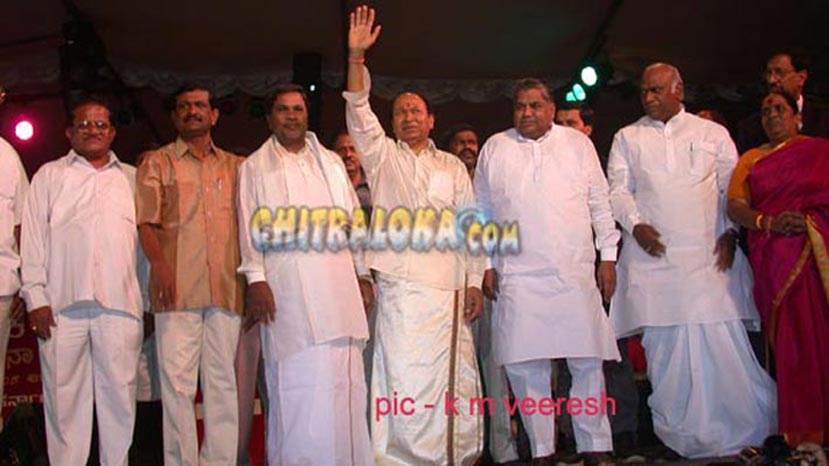 Fed up with the order of two minutes speech from the government officials the key speaker on the evening Baraguru Ramachandrappa preferred to call Dr.Rajkumar as ‘Bevarina Manushya’. Meaning – he had come up in life sweating to reach the height of ‘Bangaradha Manushya’. Kuvempu, the Rashtrakavi said ‘Nisarga’ – nature is god. But Dr.Rajkumar has said ‘Abhimanigalu’ his fans as Gods. The noted scholar and literary personality Baraguru Ramachandrappa recalled what Dilipkumar, Amitabh Bachchan, Sanjeevkumar, Gubbi Veeranna, Dr.Rajkumar, director HLN Simha observed on the achievement of Dr.Rajkumar.

Rebel star turned Member of Parliament Ambarish recounted the days of ‘Odahuttidavaru’. Dr.Rajkumar is great and yet he is simple personality. He is humble. He has asked the cutout of mine to be inches taller than him when the film ‘Odahuttidavaru’ was released. That shows his greatness, humanity and clean mindset Ambarish disclosed. He also complimented Smt.Parvathamma Rajkumar for building the empire called ‘Dr.Rajkumar’.

Today is unforgettable. I saw first Dr.Rajkumar when I was seven years in Mysore. He has grown to heights of sky. I am not having ‘Yogyathe’ but Yoga to talk about our Rajanna – the superstar of Kannada cinema Vishnuvardhana expressed and the huge crowd responded with thunderous applause. For every actor Dr.Rajkumar is a model. His dialogues and acting capacity is superb. Vishnuvardhana also thanked the Karnataka Government for arranging such a memorable function.

Mukyamantri Chandru also sitting member of legislative council from BJP party said one of the best work done by coalition Karnataka government is this one he felt. I had the chance to act with Dr.Rajkumar in five films. He has been splendid in all walks of life. Whenever the trouble for the Kannada language comes Dr.Rajkumar has to take the lead. The film chamber has to come united when there are problems Chandru felt. He also advised the police to be liberal as his was asked to get out by them when she missed to follow him to this function.

Chitraloka and Global Consultants had arranged Dr. Raj rare photos exhibition at the palace ground. Raghavendra Rajkumar and others was amazed to see the photos of Raj collections had by chitraloka.com.

It was a fantastic arrangement from the government side. The Global Consultants made very tight arrangements for invitees and general public to reach the spot with not much of hassles.