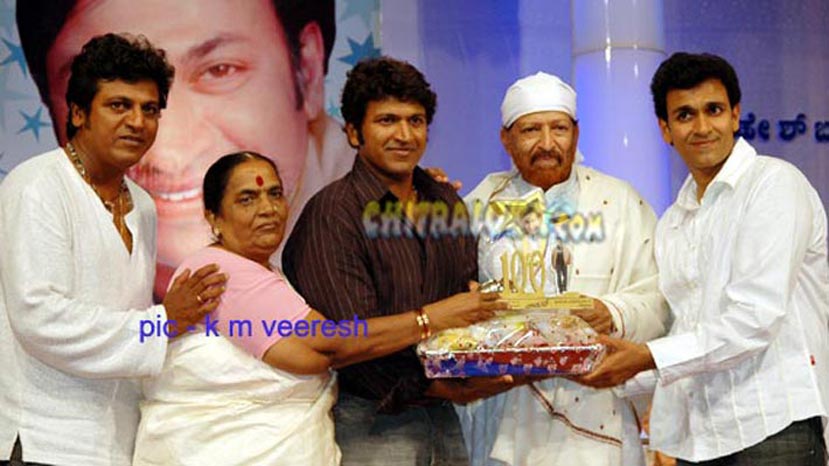 It was a function that was much looked for in the industry. The hundredth day celebration of Puneet Raj Kumar starrer `Arrasu’ had many big wigs of the Kannada film industry making their presence along with the technicians and artists of the film who had worked for the film.

Dr. Vishnuvardhan who was the chief guest of the function was a star attraction, while well known literary personality Baragooru Ramachandrappa, actress Ms. Jayamala, regulars in the functions related to Dr. Raj Kumar’s were the guests. I.M. Vittala Murthy, the Secretary of Information Department, Tallam Nanjundashetty, President of the Karnataka Film Chamber of Commerce, Tipatooru Ramaswamy, close friend of Dr. Raj Kumar and others were also on the dias. Actors Jaggesh, Ganesh, Audithya, Directors S.V. Rajendra Singh Babu, D. Rajendra Babu were present. All the members of Dr. Raj Kumar’s family were there to ensure a grand success of the function.

The entire function was like a trip to a memory lane and speaker after speaker spoke about many good and ideal qualities of Dr. Raj Kumar, whose first death anniversary was held only a few days ago. The actors, cine workers and technicians of the film were also felicitated.